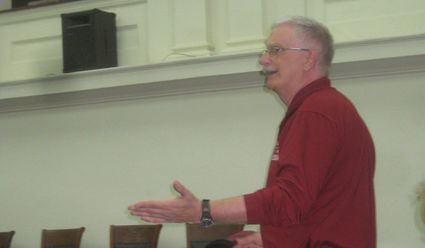 BESSEMER - The Gogebic County Board of Commissioners tabled a request Wednesday by the 911 Committee to increase the monthly surcharge on phone lines.

Emergency Services Director Jim Loeper presented the committee's request of increasing the monthly surcharge from $1 to $1.30.

Loeper said the money is needed as the cost of equipment, salaries and insurance continue to increase.

Loeper said the county's 911 annual budget of $299,000 is supported by the surcharge on phone lines and cell phone contracts in the county, as well as money that comes back from the state as it distributes portions of a 19-cent state charge, even on pre-paid cellphones. He said the 19-cent state charge brings in between $33,000 to $38,000 a quarter.

The 30 percent increase in the surcharge would garner an extra $50,000 a year, said Loeper. He also said the county's 911 contract for dispatch services with Iron County, Mich., is up at the end of the year and the committee has begun the process of securing new bids.

Some of the commissioners, including Jim Oliver, Jeff Wasley, Tom Laabs and chairman Joe Bonovetz, asked for more details before voting. Oliver made a motion to table the request until the next meeting. That motion passed 6-1, with Leroy Kangas, a member of the 911 Committee, the only dissent.

Paul Anderson of Coleman Engineering told the commissioners about the Michigan Western Gateway Trail Authority's next project - continuing a non-motorized trail from Ironwood to Bessemer along the abandoned Soo Line Railroad corridor.

Anderson said the Michigan Department of Natural Resources Trust Fund has approved a $295,000 grant. The county needs to file the paper work by May, he said. The money would come from the state as reimbursements for work done by the county.

The $1.6 million, 4.2 mile project will include a 10-foot wide paved trail with 2 feet of shoulder on either side, Anderson said, adding plans are due to the Michigan Department of Transportation in the fall, bids will go out in the winter and the work will be done in the summer of 2016.

Anderson said the Convention and Visitors Bureau has pledged money toward the project, which began seven years ago. "We've come along way."

The project has many supporters and "it's good to see people coming together like this," said county board chairman Joe Bonovetz.

Ironwood is working on its portion of the MWGTA trail this summer. This second portion starts at the Ironwood city limit and heads east to Moore Street in Bessemer. The third part of the trail would stretch from there to Wakefield.

The board approved a list of 67 high school seniors in the county who will be awarded DalPra Trust scholarships. The awards of $2,500 a piece were made after application. Board member Jim Oliver said the low threshold for GPA was 2.0, as the scholarships are meant to include "the late bloomers."

On the advice of Gogebic County Equalization Director Tom Novascone, the board approved the County Equalized Value at $660,199,370.

Ashley Hampston of the Gogebic County 4-H office reported to the board that 4-H has three new clubs including a dog club and a garden club. The 4-H staff was also recently in the Bessemer and Ironwood schools showing the kids various farm animals.