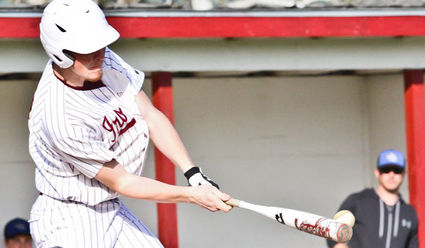 Ironwood's Matt Dary hits a three-run home run in the bottom of the third inning during Thursday's Indianhead Conference game at Lorenson Field in Ironwood.

"It was our fourth game this week, so we were scraping along a little bit," Ironwood coach Dan Niemi said. "But I'm happy with our performance. A lot of people played well. Both teams needed the game and wouldn't say die. We didn't fold and we worked through our tough spots. We've been playing some tough competition and the bats were better today.

"Our young guys like Josh Joki, Tony Wiemeri, Shawn Pertile and Ryan Tibaldo have really picked it up well and our veterans like Devo (Devon DeRosso) and Matt Dary have shown great leadership. Brett Ossanna pitched, was a catcher, played second base and in the outfield today."

Mellen coach Tim Polenchek was in a better frame of mind than after his team's 19-9 loss to Hurley earlier in the week.

"We played five good innings, but we always have one or two bad innings," Polenchek said. "We've had a long losing streak but we're not giving up. We're 1-8. But we are going to give teams a run for their money in the second part of the season. We have to clean up the defense. Everyone fought hard today and the wins will come with hard work."

Granite Digger Trevor Beach was tagged with the loss as he pitched 4 and 2/3 inning and gave up 15 runs on 8 hits. Only 7 of the runs were earned, but he also issued 8 base-on-balls and his teammates committed 9 errors.

"I felt good pitching out there in the first couple innings," Dary said. "I would have liked to pitch a little longer, but my arm got a little sore. I was using my forkball on them. After my sophomore year, I started throwing it. I get them chasing that slower pitch and then throw the fastball as a good change. It works good the other way, too."

Dary mowed down the first six Granite Diggers before an Ironwood error and two hit-batsman and wild pitches brought in two Mellen runs in the third inning.

But Ironwood came out mashing the ball, working walks and taking advantage of Mellen's miscues. The Red Devils scored four runs in the first inning and batted around in the third inning and plated five runs.

Jon Clemens, Ossanna and Dary scored twice and every Red Devil was on base at least once. The highlight of the two-inning barrage was when Dary roped a big fly over the left field fence for a three-run homer.

"I definitely got a hold of it," Dary said. "It felt great to swing the bat like that and knock one out, but I didn't think it had the height to get out."

Ironwood led 9-3 after three innings and looked to be cruising, but Dary had to leave the pitching mound after four innings.

Ossanna, Clemens and Wiemeri came on in relief and allowed nine runs. But it was Ironwood's defense that sprung a leak as five of the nine runs were unearned.

Luckily for the Devils, they put together one last big inning. Clemens opened the inning with an infield hit and Ossanna was safe on a bad hop single over the shortstop's head. Dary was walked intentionally to load the bases.

Joki stroked an RBI single and Wiemeri's sacrifice fly brought in a run. Pertile's ground out scored another run. Jake DiGiorgio reached on an error, DeRosso, Tibaldo and Clemens all walked and Ossanna's RBI infield hit knocked in the sixth run.

Mellen scored three more times in the seventh inning, but the Red Devils held on for a 15-12 victory.

Ironwood (2-3, 2-1 IC) travel to Bayfield on Tuesday for another conference battle.