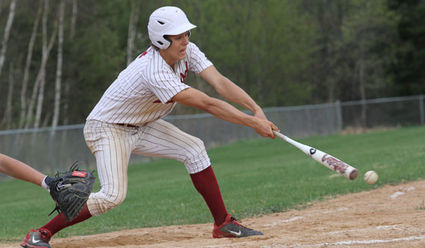 Jake DiGiorgio, an Ironwood senior, strokes a single to right field during the second inning of the Red Devils' 3-1 win over Drummond, Wis., Thursday afternoon at Lorenson Field.

IRONWOOD - Seldom-used Ironwood pitcher Brett Ossanna surprised everyone with a great pitching performance and the rest of the Ironwood Red Devils played their best game of the season in defeating Drummond 3-1 in Indianhead Conference action at Lorenson Field on Thursday.

Ossanna has been used sparingly as a relief pitcher, but Ironwood was hurting for pitchers with the number of games piling up, so Ossanna got the starting nod on Thursday.

"It was a situation where we had to use him as a starter," Red Devil coach Dan Niemi said. "Brett was phenomenal. He pitched a great game. There's just something about a lefty. He was pitching at various speeds and hitting his spots. And our defense played very well behind him.

"The kids came hungry and focused and it paid off. The hard work is paying off. I'm happy with our progress."

Count Drummond coach Brad Giesregen among those who was impressed by Ossanna and the game itself.

"Both teams played well," Giesregen said. "It was good to see good baseball. It was a clean game that Ironwood deserved to win. They outhit us, especially early. Their lefty threw very well. Their pitcher's curve had us off-balance all night and we didn't hit the ball solid.

"Our pitcher (Colin Mergen) settled in after the first couple innings, but we made some key defensive mistakes that cost us and led to runs. But it was a good game for both teams."

Ossanna seemed a bit surprised by the whole thing.

"I pitched mainly in relief, so I didn't see this coming," Ossanna said. "We were hurting for pitchers and I just wanted to give them a break. I just wanted to throw strikes. I just threw the ball over the plate and let them hit it. Pitch to contact. I didn't walk hardly anybody. I threw 109 pitches and the defense played phenomenal. They made the plays. I'm looking forward to pitching again."

Ossanna went the distance (7 innings) and stifled Drummond on one run and four hits. He whiffed eight Lumberjacks and issued three walks.

Mergen took the loss and in six innings of work. he surrendered three runs (two earned) on nine hits.

Drummond committed four errors, while the Red Devils had only two.

Jon Clemens got the Devils started in the first inning when he hit a ball to left field that was misplayed. He stole second base and Ossanna helped his cause when he roped a line drive into the gap in right-center that plated Clemens

In the second inning, Devon DeRosso connected on a base hit to left and then Clemens swatted a single to left that the left fielder turned into an error. The error allowed DeRosso to cross the plate with the second run.

In the third inning, Sackmann laced a single to left that was booted and he wound up on second. Ossanna hit a liner to the right-centerfield gap that was identical to the one he hit in the first inning. Sackmann scored Ironwood's third and final run.

Drummond's four hits all came on singles, while Sackman and Ossanna led Ironwood's hitting with a 2-3 performances.

The Red Devils have won four straight games and are 5-1 in the Indianhead Conference. They are 5-3 overall.

The Red Devils travel to Mellen today for another conference game.