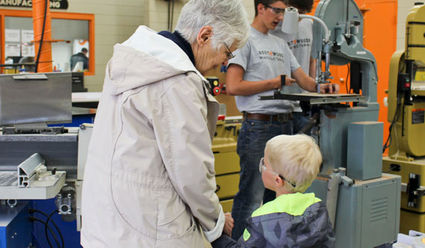 Northwoods Manufacturing student Ethan Everson demonstrates a saw during an open house at the Hurley K-12 School Friday. Many family members were among the day's attendees, including Everson's younger brother, Adam, and grandmother Marlita Everson.

A steady stream of visitors flooded the shop throughout the day, talking with the students and watching demonstrations. Visitors were able to tour the metals and woods shop and talk with the students involved in the program.

Students were busy all day working on projects and demonstrating the skills they have learned while in their technology education classes.

This year the Northwoods Manufacturing student-run business made two big ticket items during the school year - a utility trailer and a table set - that were raffled off during the open house. Tammy Rowe won the table set and Jean Peterson won trailer.

There were also numerous smaller projects made by the students for sale, as well as concessions and other raffles.

The Northwoods Manufacturing officials - students and teachers - thanked those who attended, as well as local businesses which have supported the program.

"Without the support of the surrounding businesses and community, the program would not be the success it is," said a spokesman.