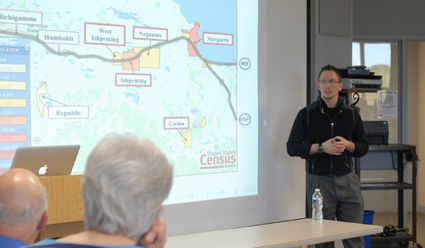 WIL RANKINEN discusses the dialect changes of Finnish and Italian residents in Marquette County at Gogebic Community College Wednesday night as part of "The Way We Worked" events happening throughout the region.

IRONWOOD TOWNSHIP - Approximately 40 people gathered in one of the classrooms in the Solin Business Center of Gogebic Community College Wednesday to hear Wil Rankinen present a talk based on his doctoral dissertation, "The U.P. Dialect: A Story of Change."

Rankinen - who is currently a visiting assistant professor at the linguistics department of the University of Rochester (N.Y.) - began by explaining that languages evolve and change over time, citing the evolution of English from the time of "Beowulf" and Shakespeare to how it is used now as an example.

Following this, Rankinen explained his doctoral research which largely focused on the Finnish and Italian communities that exist in the region from Marquette to Michigamme and Republic in Marquette County. He specifically studied how the pronunciation of vowels changed in the community from the old bilingual speakers to younger residents who only spoke English.

Rankinen said he was trying for find out if the pronunciation of vowels shifted and what could be attributed as causing the shifts.

While it is commonly taught that the English language has five or six vowels, Rankinen said for linguistic purposes there are in fact 13 to 15 vowels.

"We can talk about these individual vowels in a number of different ways, but probably the easiest way to process what is a vowel is thinking about how (you produce) each of these particular vowels," said Rankinen, "it actually has to do with the your articulation, what are you doing with your tongue in relation to the roof of your mouth."

He explained that there are a number of regional dialects but that the Upper Peninsula falls between the Canadian dialect region and the Inland North dialect region which encompasses much of Michigan and Wisconsin. As the U.P. exists in a transitional territory referred to as the North Central dialect region, it features a mix of features of both the surrounding dialects.

Rankinen then explained his methodology - which featured having research participants read a simple passage of text and then having audio equipment analyze how the people pronounce vowels - as well as his results.

Rankinen found several interesting conclusions in his research including that younger speakers, particularly middle-class females have begun adopting some, but not all, of the vowel pronunciations that are characteristic of a Canadian dialect. He also found that working class communities were the most resistant to encroachment from outside dialects.

There are less dialect patterns from lower Michigan and Wisconsin, Rankinen explained, because those trends tend to be happening in urban centers and the U.P.'s rural character is preventing those shifts.

Rankinen said that linguistic research showed that women in particular are faster to adopt dialect changes that are deemed desirable.

He said while more research was needed and the results of his research couldn't be stated in absolute terms, the data that middle-class females have adopted the Canadian dialect characteristics the fastest could be caused by the relatively weak social circles in this demographic, making intrusion more possible. The resistance from working-class women to the intrusion of the dialect changes could also be attributed to their stronger social bonds and an adherence to the traditional U.P. culture, Rankinen said.

Rankinen's presentation was part of the ongoing "The Way We Worked" activities that are being offered in connection to the Smithsonian exhibit that is on display in Ironwood.