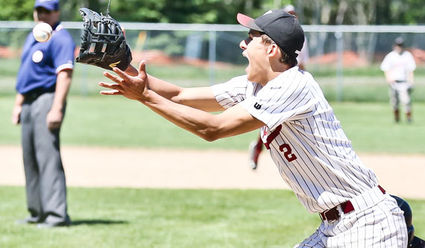 Ironwood first baseman Jake DiGiorgio catches a throw from catcher Jon Clemens during the sixth inning in an attempt to pick off a North Central runner at Monday's MHSAA Division 4 District 97 semifinal at Marion Park in Norway.

NORWAY - It is said that good pitching and solid defense wins baseball games and there was plenty of both on display in the MHSAA District 97 semifinal between North Central and the Ironwood Red Devil Devils on Monday.

"We just didn't get it done in the end," Red Devil coach Dan Niemi said. "The mental part of a ball game is so important. That's been the tale of the tape for this year. Teaching and learning the game of baseball are very important. You have to be a smart cookie to play this game."

Niemi was referring to Ironwood's final at-bat in the seventh inning.

The Red Devils entered the seventh inning down 4-1 with the 5-6-7 hitters coming up and the Jets looking to close out the game. First baseman Jake DiGiorgio hit a ball deep in the hole and beat the shortstop's throw to first. Matt Dary walked and then he and DiGiorgio made a double steal to second and third base.

Devon DeRosso laced a ball to the shortstop and the ball went through his legs as DiGiorgio and Dary crossed the plate to make it 4-3.

"We had a man in scoring position at second base with one out," Niemi said. "The batter was supposed to lay down a bunt first and then we steal third."

But the bunt was missed, the runner went anyway and he was tagged out trying to steal third. The air went out of Ironwood's rally balloon and the game ended with an Ironwood strikeout.

"That was a pretty interesting top of the seventh," North Central coach Kyle Durow said. "Our defense can be shaky, but we always count on our pitching. I was confident in our guy (Bobby Kleiman), because he was pitching so strong and had good stuff. Both pitchers had good control and kept the hitters off-balance. That's why I kept our guy in there. And we've been in situations like this one before."

And Niemi said the pitching performance of Ironwood's Matt Dary was just as good as Kleiman's. Dary gave up four runs (two earned) and scattered eight hits, while whiffing two Jets and not walking a batter.

"Dary had 92 pitches and 74 strikes," Niemi said. "That's a very good ratio. That's the best game I've seen him throw all year. It's sad for our seniors, because they could have had another game."

Dary agreed it had been his best effort this year.

"I've had injuries early in the year, but I felt healthy today and my arm felt good," he said. "I had a good mixture of a fastball and forkball and I pounded the strike zone, which is the key to good pitching.

"It was a hard-fought game and I think if we had one or two innings we could have won it."

The Red Devils got on the scoreboard first. Jon Clemens led off the game with a fly to left the left-fielder couldn't come up with. He stole second and Josh Joki hit a frozen rope single to right that brought in Clemens.

North Central answered back with a lone run in the first inning and then scored once in the third and twice in the fifth inning. The Jets led 4-1 after five innings.

Ironwood was stuck in gear after the first inning as Kleiman shut them down on no runs and one hit in the next five innings.

The Red Devils came to life in the seventh inning, but it was too little, too late.

Clemens, Desmond Sackmann, Joki and DiGiorgio all had base knocks for Ironwood.