Dimich and Gulan win Battle at the Bluff 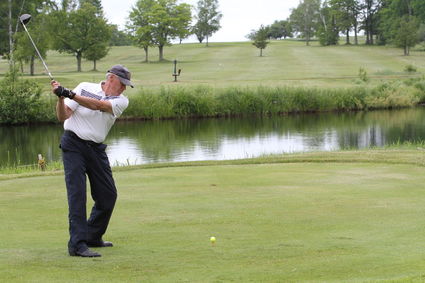 JIM CIRILLI, of Superior, Wis., tees off on the par 5, 460 yard fourth hole during the Battle at the Bluff 36 hole two-man best ball golf tournament at Eagle Bluff Golf Club on Saturday.

HURLEY - The Battle at the Bluff is a unique two-day, 36 hole best ball golf tournament hosted by the Eagle Bluff Golf Club and Trinity Dimich, of North Branch, Minn., and Jeff Gulan, of Hurley, won the championship flight by shooting a 69 on Sunday.

Gulan said a change in the tournament's format may have helped them win the championship flight. Saturday's round and score now determine a team's flight and position in that flight for Sunday's round.

But all the scores from Saturday are wiped out and all the teams (or partners) start from scratch on Sunday.

"The format change gave us a chance," Gulan said. "Scott Erickson and Tim Steiger shot 66 yesterday and we shot a 72. It would have been tough to make up those strokes, because those two guys are real good golfers."

And Dimich said teamwork played a key role in their win.

"We ham-and-egged it," Dimich said. "We hit it around a little, but we avoided the bogeys. If one guy messed up and hit a bad shot, the other guy picked him and hit a good one."

Erickson and Steiger finished close behind by firing a 70 on Sunday.

Dennis Mackey and Guy Trier, both of Ironwood, won the first flight with a Sunday round of 80. Gary Gotta and Matt King, of Hurley, were second with an 82.

In the senior division for golfers age 62 and older, Dennis Cossi, of Ironwood and Daryl Johnson took the top spot with an 82 and Bill Richie and Larry Simpson shot an 84 for second place.

Eagle Bluff manager and tournament director Matt King said the Battle at the Bluff "went pretty good," but the 18 total team entries needed to be improved.

"The golfers had a good time," King said. "Guys that support this tournament are good people and really enjoy it. But it's getting tough to get entries and draw people. Our population keeps going down and when the high school kids graduate, they have to leave the area because they can't find jobs." 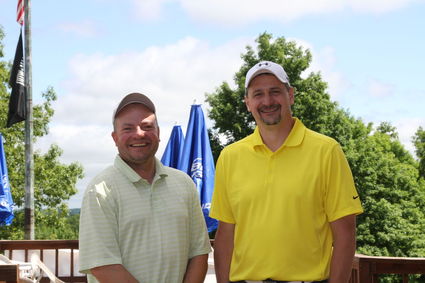 TRINITY DIMICH (left), of North Beach, Minn., and Jeff Gulan, of Hurley, were the winners in the championship flight of the Battle at the Bluff 36 hole golf tournament at the Eagle Bluff Golf Club this weekend.

Dimich said everyone involved in the tournament had "an awesome time."

"We had Joe Brown and Jeff Haapoja in our foursome and had a great time," Dimich said. "But so did everyone. This is a real good tournament, but more people should come out and support it. It's not ultra-competitive and its fun to play here."

Battle at the Bluff Results