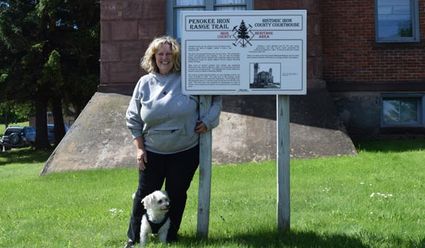 MELINDA ROBERTS and her dog, Dexter, stop at the Iron County Historical Museum in Hurley while traveling around Wisconsin.

Before she received the bad news, Roberts said she had just moved to De Pere in 2011 for a new teaching job.

"Within a very short time, I was diagnosed with stage-three colon cancer," Roberts said. "And they gave me a two-year window. He said, 'Go do something fun.' And I didn't know a soul here and I had no family."

Roberts followed the doctor's orders and went on a trip to Baraboo. That's where she said she found her first historical marker.

"I took a drive down to Baraboo to go see the Man Mound, and I found a state historical marker," she said.

Having seen a historical marker for the first time, Roberts said she wanted to learn more about them.

"So I went home and thought, 'What's this all about? I guess we don't have any of these in California,'" she said.

After doing a little research, Roberts said she found out there's more markers than she thought.

To keep her mind off cancer and give her something to do, Roberts decided to visit every last one.

"I said, 'I'm going to visit all these markers, because I'm not going to survive past December of 2013,'" Roberts said. "I better do something fun."

"My goal was to finish in December, for the two-year anniversary," she said.

Along the way, Roberts said she had an idea. "I began to plop them up online," she said.

While online, Roberts said she found another Wisconsin-based website.

"There's another website, run by men, and it's horrible," she said. It's not very organized. I'm using their site to find some of your markers. I went on so many wild goose chases while following some of their directions."

Roberts said she used the website as motivation to make hers better.

"I thought, 'my website's going to be better,'" she said.

During her travels, Roberts said she found all sorts of different markers.

"Along the way, I started finding other markers," she said. "But I was on a goal just to find the state markers, because I didn't know if I was going to survive."

In October of 2013, Roberts said she completed her project ahead of schedule.

Looking back, Roberts said she thinks she survived cancer because of her adventures.

"I think it's because of the project," she said. "I was only thinking about markers. That's my 'Wisconsin life.'"

Since finishing her project, Roberts said she's found that more people are interested in markers.

"I know people are interested in markers because there's geocaching. "You have something there for them find. You're supposed to leave something and take something."

By geocaching, Roberts thinks new people will be inspired to explore Wisconsin.

The goal of geocaching is to hide a souvenir somewhere, post the coordinates online, and then someone will find the souvenir and replace it with something else.

Now that she's finished her goal, Roberts said she has a new project.

"I'm moving now toward doing a blog," she said. "Now I have a goal that everybody has a place to be represented.

On her site, wisconsinhistoricalmarkers.blogspot.com, she has posted about all sorts of markers, statues and other attractions.