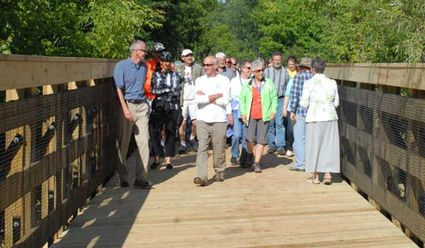 AREA OFFICIALS and residents, including Will Andresen of the University of Wisconsin Extension's Iron County office, left, cross the newly renovated railroad bridge over the Montreal River between Hurley and Ironwood, at the beginning of a celebration of the bridge's completion Tuesday. The bridge will allow a regional non-motorized trail to run from Montreal Wis., to Wakefield.

OVER THE Montreal RIVER - Area officials and residents gathered on the now-renovated railroad trestle spanning the Montreal River and connecting Ironwood and Hurley Tuesday to celebrate the completion of the first section, however small, of a regional trail that is planned to go from the ski trails in Montreal Wis., to Sunday Lake in Wakefield.

The trestle bridge has been under construction for roughly a month as workers installed decking over the existing wooden beams and railings along the sides so it could be safely used as the link between the Wisconsin and Michigan portions of a non-motorized trail that is being developed.

The ceremony included speeches from both Ironwood and Hurley officials, Will Andresen - with the University of Wisconsin's Iron County Extension Office - who played a significant role in seeing the project completed and Marc Miller, a regional initiatives deputy with the Michigan Department of Natural Resources.

Andresen gave a brief history of the project and thanked everyone for their support in helping complete the bridge.

He said the work on the bridge had originally been planned to be included in the overall grant funding for the trail system, however, bids were higher than expected and it had to be cut.

"The fear was that we were going to lose this part of the project. The bridge that is not just a physical connection between the two communities, but a symbolic one," Andresen said.

This led to the launch a "Bridge the Gap" campaign to raise the $50,000 needed for the work to the bridge.

Andresen also spoke about the possibilities the planned regional trail can provide for future generations.

Andresen concluded his speech, quoting Reinhold Neibuhr, by saying that nothing worth doing can be achieved in our lifetime.

"All those things that we talk about imagining, someday in the future, may not happen in my lifetime but it's going to happen and it's going to be great, thanks to all of you," said Andresen.

The bridge is a key link in a comprehensive non-motorized trail system that is planned for the region, ultimately running from Montreal to Wakefield with spokes shooting off to area destinations such as Interstate Falls and Norrie Park.

While the Wisconsin portion of the regional trail remains in the "visionary" stage, the Michigan portion of the regional trail is expected to be completed in three phases, according to Andresen, with a firm time line and funding secured for the first two phases. The first phase, scheduled to be completed this summer, will run from the Montreal River to the Ironwood city limit. The next phase, completed next summer, will continue the trail to the middle of Bessemer. While the timeline remains uncertain until funding can be secured, according to Andresen, the final phase will take the trail all the way to Sunday Lake in Wakefield.

The regional trail would someday connect to statewide trails running through both Wisconsin and Michigan, including Michigan's planned Iron Belle Trail running from Belle Isle in Detroit to Ironwood.