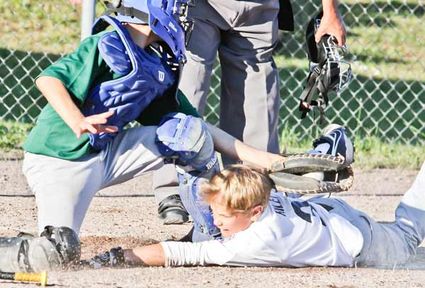 WAKEFIELD - The Penokee Range All-Star team built a sizable lead in the Little League District 11 boys 11-12 year-old baseball tournament and held on to win 7-6 over Keweenaw on Tuesday night.

"We were getting a little nervous at the end," coach Ross Solberg said. "Payton (Solberg) pitched well and had great command. But we have a pitch count in Little League and if he threw one more pitch, he would not have been able to pitch for four days. We also picked it up and played good defense "

The trio combined for six of Penokee Range's eight hits (in five innings).

Penokee Range jolted Keweenaw quickly and took a 6-0 lead in the first two innings. Zak Baross opened the game with a type of swinging bunt in front of the plate and sprinted for first base. The Keweenaw catcher picked up the ball and threw to first base, but it hit Baross on top of the helmet and the ball bounced into right field. Kody Henning plated Baross with a double down the right field line and then Solberg clubbed an RBI double over the right fielder's head. Trevor Hug finished the first-inning scoring by lacing a single into the right-centerfield gap that brought in Solberg.

In the second inning, Penokee Range strung together three straight singles and Ethan Libertoski, Henning and Solberg crossed the plate.

After a walk in the fifth inning, Penokee Range's Seth Cole walked and later scored on a wild pitch to make it 7-0. Keweenaw would use four different pitchers in the game.

Solberg was pitching a gem for four innings and blanked Keweenaw on three hits. But he gave up a soft liner over shortstop to start the fifth inning and he had reached his pitch limit.

Keweenaw charged back with three runs in the fifth and scored three more in the sixth inning before Adam Libertoski put out the fire by getting the final two outs.

Henning, Solberg and Hug led Penokee Range's offensive attack with two hits each, while Dean Loukas, Paul Sturos and Mason Codere were 2 for 3 for Keweenaw.

"They won the district the last two years and are probably the favorite this year," Ross Solberg said.

Solberg said Henning would be the starting pitcher today