Local Little Leaguers hold off Keweenaw to adance in tournament 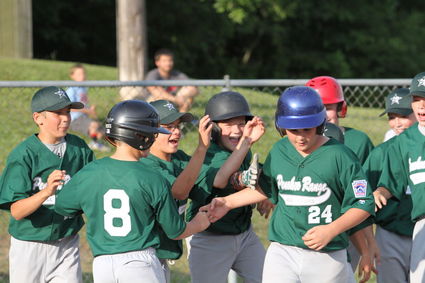 "I knew we had it all the way," joked Penokee Range coach Ross Solberg. "Actually, we're proud of every kid on the team."

Now it's on to Marquette to play the winner of the Marquette-Ishpeming today at 4 p.m. CST. The field is located just past Longyear Field by the Superior Dome.

Solberg said the two Penokee Range-Keweenaw games played this week were very similar. In both, Penokee Range jumped out to 6-0 leads, but then saw its leads evaporate and almost disappear. Penokee Range hung on for a nail-biting 7-6 win on Tuesday.

After five-and-one-half innings of Thursday's game, PR held a comfortable 10-5 advantage and looked to cruising to a fairly easy win going into the last inning.

"One of the keys to our win was that Adam Libertoski held down Keweenaw for 4 and 2/3 innings," Solberg said. "And our defense held it's own."

But Little League has its pitch limit rule and Libertoski was at the end of it. Penokee Range used two new pitchers, but Keweenaw rallied for four runs on two hits, three walks, a hit bats-man and an error.

Keweenaw's Jackson Rilei also got in a run-down between third base and home plate and escaped to score.

Penokee Range clung to a 10-9 lead with one out and the bases loaded. Solberg brought in Sethe Cole who got an out and then pitched to pitch to Matt Kilunen. He worked the count and then hit a hard ground ball to shortstop Kody Hemming. Hemming snagged it and tagged the runner going from second to third and the game was over.

"Sethe Cole came in to pitch in a tough situation and showed a lot of composure under pressure," Solberg said. "This was big for him."

Penokee Range built its big lead mainly behind the booming bat of Payten Solberg. He was 3-for-4 with six RBIs and slugged a three-run homer over the left-center field fence after which his teammates came out to mob him at home plate.

Cole was also 2-for-3 with two runs scored.

Paul Sturos, Dean Loukas and Isaac Bennetts all had two hits for Keweenaw.