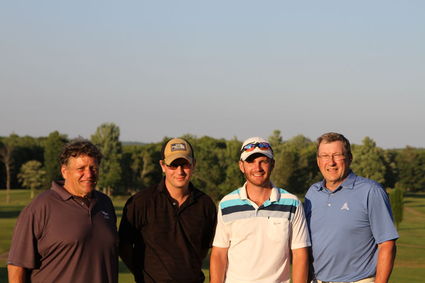 Simon Store and Jordan Barto shot a 67 and won the Championship Flight of the Milakovich Memorial Tournament at the Gogebic Country Club Sunday. From left are golf manager Gary Mariani, Store, Barto, and Jim Milakovich.

IRONWOOD - When Jordan Barto and Simon Store qualified for the Championship Flight by shooting a 70 on Saturday, many at the Milakovich Memorial Tournament probably considered them dark-horses to compete with the "big names" and win the championship on Sunday afternoon.

But Barto and Simon never imagined themselves not winning the Milakovich.

"We thought we could win," Barto said. "That was the goal before we teed off on Saturday. We have the game. Simon and I play well together and get along well."

Simon said the partners thought they needed about a 67 to win on Sunday and that's exactly what they shot.

The team fired a 33 on the front nine, but Barto said the back nine needed to be better.

"We were two under (par), but we bogeyed seven which was a bummer," Barto said. "We knew we needed a couple more birdies on the back nine."

But after 13 holes, the team was still two under par and the pressure was beginning to mount.

"We'd like to thank the Milakovichs, Gary (Mariani) and all the volunteers."

Kyle Hauswirth and Reese Lassila took second place in the flight with a 69.

Seeking to three-peat on tournament championships at the Milakovich, Zak and Cody Langdon couldn't get rolling and finished tied for eighth in the Championship Flight with a 75.

Andy Borseth, of Ontonagon, and Todd Roehm, of Luck, Wis., captured first place in the First Flight on Sunday. They fired a 69.

"We played well today," Borseth said. "They key was neither one of us got in trouble off the tee. The course was in real good shape and we birdied 7, 12, 14 and 17 after we bogeyed the first two holes. We thought it might be a long day, but we settled down and played."

Joe Strong and Pat Peska were in second place with a 70.

In the Second Flight, Justin and Jared Reid took the lead outright by birdieing three of the final five holes to shoot a 70 and held off Dave and Guy Vaara, who came in with a 71. The Reid's had five total birdies.

"We didn't play real well on the front nine (36), but we got it going on the back nine," Justin Reid said.

In the Third Flight, Garrett Greenwald and Rusty Malovrh (74) edged out Jim Milakovich and Tom Faries with a 75.

Milakovich said he first became friends with Faries 43 years ago when they served overseas in the Army. They kept in touch and remained friends and Milakovich invited him to play with him in the Milakovich Memorial and Farius obliged.

"He was like a younger brother I didn't have and we had a good time today." Milakovich said.

Golf manager GaryMariani said overseeing his first Milakovich Memorial was "great" and termed it "a success."

"Everything went pretty smooth," Mariani said. "Everything came together. The weather was fantastic after it looked like it was going to lightning, thunder and rain when I got here at 4:45 a.m. on Saturday. It's fun to see all the people come back every year, especially the families. That was good to see.

"Congratulations to Simon and Jordan. They are both good players and both hit it beautifully."

Milakovich is a man who keeps a watchful eye on a tournament that bears his family's name.

"The tournament went really well and with Gary Mariani operating this in his first year, he did a great job," Milakovich said. "We had a combination of people helping out and they put in a lot of time and effort. I'm grateful to all the volunteers. It was a great team effort from people like Chris Lahti at the Elk and Hound who feeds us great food and the Lady Golf League. They are so good and so professional. And Fred Tijan has a difficult job on the course. 3 and 1/2 men and they do a great job.

"We want all the people to have fun and we want them to come back."

In sweltering 85 degree heat, Justin Borseth, of Bruce Crossing, and John Houle, of Green Bay, Wis. shot a 67 and were medalists on Saturday. Their round included an eagle 2 on the par 4, 16th hole.

Also qualifying for the championship flight on Sunday were Tom Talaska and Blaine Sprague in second place with a 68 and Cody and Zak Langdon finished third in the flight with a 69.

Four sets of partners posted a 71 for the final spots in the championship flight. The teams were Todd Brauer/Matt Lindberg, Scott Larson/George Boline, Jack Wawro/Gary Alkire and Kyle Hauswirth/Reese Lassila.