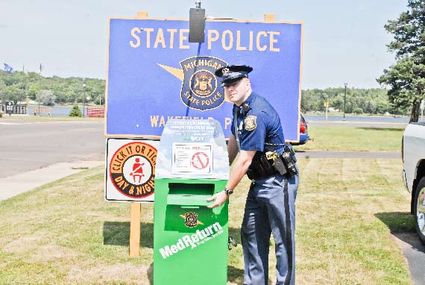 The box will be available for residents to use during the post's hours of operation, Mondays through Fridays, 8 a.m. to 4 p.m., according to trooper Warren Webster.

The box offers an easy, anonymous way to dispose of certain prescription medicines, Webster said, adding that while post personnel will monitor the disposal to make sure only accepted items are put in the box, no information is collected from residents using the box.

"Obviously, you don't want to be putting medication into the water, flushing it (down the toilet) or anything," Webster said. "This is a safe way to dispose of medication."

No needles or biohazardous material, Webster said, and no illegal drugs are to be accepted.

The boxes are becoming more common throughout the state, Webster said, and both the Ironwood Public Safety Department and Gogebic County Sheriff's Department also offer the service, with the sheriff's department box available for use 24 hours-a-day.

Webster explained the process to use the box is simple and "worry free.

"(Anyone can) come in, say 'I want to drop off some medications.' (Personnel) show you where the box is, you throw it in there and that's it," Webster said. "It's pretty straight forward."