Miners kick off season with rout of Bulldogs 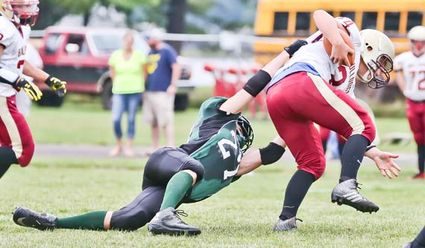 WAKEFIELD - The Gogebic Miners and first-year varsity head coach Mark Movrich started off the season with a convincing 48-7 win over Hancock on Saturday.

"I'm definitely glad for the win," Movrich said. "When you win that first game, it's easier to come back to practice and focus on the positive things we did and what we have to do better.

"We made some first-game mistakes, but we were able to keep the ball moving and we've got some explosive backs. All too often, a line will just push or lean on guys, but our line was pushing them back and pass protecting, too."

The statistics bore out who was the better team on Saturday. The Miners mainly used long, ball-control drives to churn out 17 first downs to six for the Bulldogs and piled up 270 rushing yards to 81 for Hancock.

Gogebic won the turnovers and penalties battles and had long kickoff returns for touchdowns by Caleb Greenough and Collin Gagnon.

"I don't care if it takes us two plays or 22 plays as long as we get the ball in the end zone," Movrich said.

"Gogebic's big, fast and strong," Hancock coach Matt Walter said. "But they got 28 points off kickoffs and turnovers. We had a few guys that let up on plays and we can't afford to do that because you see what happens. We're a young team and we have to fight through adversity."

Hancock started the game on a good note when the Bulldogs moved to Gogebic's 28-yard line, but the drive stalled out when Miner Bailey Ribich picked off a fourth and 9 pass.

Gogebic methodically moved downfield on an 11-play drive, but it fizzled out on the Bulldog 13-yard line.

But on the next play, Gagnon put a big stick on Hancock's running back, who coughed up the football and the Miners recovered. Two plays later, Tim Buerger's quarterback sneak from two yards out and Greenough's conversion run put Gogebic on the scoreboard at 8-0 with 1:26 left in the quarter.

Early in the second quarter, the Miners matriculated downfield from their own 24-yard line to six inches from the goal-line. But Gogebic jumped offsides and then lost a fumble on the six-yard line.

But after the first of senior Cody Harden's two second-quarter fumble recoveries, Gogebic's line began opening sizable holes. With 2:31 remaining in the half, Buerger showed a good quarterback arm as he threw a tight, on-line spiral to Greenough for a nine-yard score. Buerger ran in the 2-point conversion and the Miners went to the locker room leading 16-0.

To start the second half, Greenough electrified the big crowd with an 86-yard kickoff return that gave the Miners a 24-0 advantage and seemed to sag Hancock's spirits.

"That was one of the biggest plays of the game right there, because we were only up 16-0 at the time," Movrich said.

After an 11-yard sack by a blitzing Ryan Hemming, Gogebic marched downfield once again on a 14-play drive (13 runs, 1 pass) before Greenough went in untouched on a three yard TD run with 12.4 seconds left in the quarter.

Buerger's conversion pass to junior Ben Bogaczyk made it 32-0 and the Bulldogs were on total life support.

"It was warm and our line has big guys on it," Walter said. "They got real tired out there."

The Miners did not seem to have that problem.

"Our kids are in shape and not many of them are going both ways," Movrich said. "The kids stepped up."

After a Hancock score, Gagnon returned the ensuing kickoff by weaving back across the field and in front of the loud Gogebic crowd as he blazed to an 87-yard touchdown.

Zielinski's conversion run made it a 48-7 final.

Running backs Shane Cole, Greenough and Gagnon showed they're ready for prime-time duty. The balanced rushing attack had Cole leading the way with 85 yards on 12 carries. Greenough ran for 83 yards in 11 attempts and Gagnon rushed eight times for 37 yards.

On defense, Hemming and Bogaczyk led the Miners with eight tackles, while Gagnon had seven and junior Max Samardich finished with five tackles.

"Bark River has had great athletes with great running backs," Movrich said. "They beat Crystal Falls Forest Park this year, so they must be doing something right."