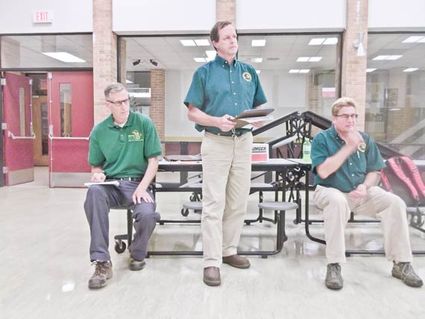 ONTONAGON - Protecting large walleyes in the Ontonagon River is a concern of  Ontonagon County sportsfishing organizations.

The Michigan Department of Natural Resources held a public meeting Thursday to receive opinions of the men and women who fish the Ontonagon River.

The impetus for the meeting came from letters sent to the DNR from the Ontonagon  County Valley Sportsmen's Club and the  Upper Peninsula SportsfishermEn's Club, both located in the county.

J.R. Richardson, Ontonagon, of the Michigan Natural Resources Commission, explained  the proposal made by the sports groups to limit the taking of fish over 25 or 27 inches  to one per boat for a trial period of five years. He said many fishermen voluntarily release the big fish back into the river, since they are the "breeders."

Richardson said recent  publicity has drawn  people from Wisconsin and Minnesota to the Ontonagon River to catch the big walleyes.  "They want their pictures taken with the big fish... and this is killing our future," one letter said.    Most in attendance agreed that the  27-inch and over walleyes are not good to eat.

Matonich said the decision on the request will  be based first on biology.

Schneeburger  said the traditional methods of determining how many large fish are in the Ontonagon River are difficult because of the current. The only mechanism available is the creel count, Madison said.

The DNR  has a creel monitor at the river every other year, with 2016 the next one. Madison said the fisheries division will have methods to determine  if the walleyes are caught in the river or lake.

Jim Rein discussed the movement of walleyes, noting they move back and forth from the lake and river.

Scott explained the best breeders are those fish from 18 to 23 inches.

For the past 10 years, the DNR has been planting  1 million walleyes in the river each year and may go to planting every other year so it can determine if the  river naturally replenishes itself, or needs the influx of plants.

"We would  be able to see the ups and downs and strengths of the river fishery," Madison said.  The suggestion by  Scott that the only real way to evaluate the river would be to cease stocking for several years  drew a resounding "no" from the crowd.

Richardson, president of the U.P. Sportsfishermen's group in Ontonagon,  said "if this was in mind, you will meet a lot of opposition, including mine."

Madison said he wished there was some business representation in attendance as the DNR wants to determine if the regulation to take just one over 27-inch walleye per boat for five years would hurt business.

Village manager  Joe Erickson said the regulation could  possibly enhance the fishing, since it  would demonstrate to fishermen that the river has some very large fish and others might come to Ontonagon just to catch one.

Madison said the proposal to limit the take of 27-inch plus fish to one per boat  will be brought before the NRC in October and voted on in December. He said  the  fisheries division wants public input and are welcome to write or call  for information.

If the proposal passes, violators will be fined.