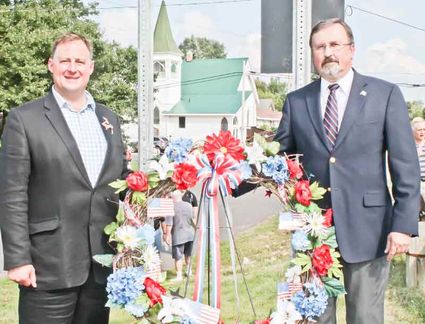 ONTONAGON - Seventeen percent of Ontonagon County residents are veterans. Saturday, the bridge over the Ontonagon River was named for these men and women, The Ontonagon Veterans Memorial Bridge.

The placing of a wreath at the bridge was made by State Congressman Scott Dianda, and  Kirk Schott, representing State Senator  Tom Casperson. Dianda and Casperson got the re-naming bill through the legislature and the bill was signed by Governor Rick Snyder.

Dianda said that with a population of 6,200 people there are a known 1,000 veterans and thanked all who had served. He also paid tribute to the families of veterans who never came home. Schott called the percentage of veterans one of the highest concentrations in any county.

As a contingent of  veterans stood by and taps was played, the two men placed the wreath at the bridge entrance.