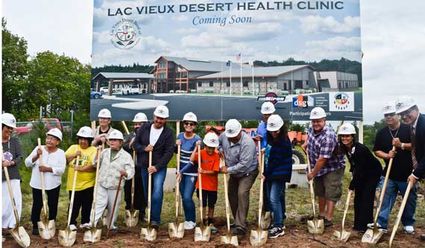 "We've overcome hurdles this year, and found some private funding and tax credits that we applied for and got. It's allowing us to meet our dream and our goal," he said.

Tribal members, health center staff and others came together to celebrate the new facility.

To begin the celebration, Leon Vallier, Jr. said a prayer in the tribe's native language.

"We appreciate the wonderful opportunities that have been given to us," he said while translating.

After the prayer, Williams thanked everyone.

"We are very proud to provide a service to LVD and the outside communities," he said. "This is a joyous occasion for many of us."

Before breaking ground, the Lac Vieux Desert Drum corps performed an honor song. When the song was over, tribal council members, health center staff and others grabbed ceremonial shovels and broke ground on the construction site.

If everything goes according to plan, Williams said the center will be completed by August.

For construction of the facility, the tribe hired Miron Constructing, of Neenah, Wis. Todd Sabourin, project executive, said the health center will be a one-story, 33,000-square-foot building.

By moving to a new facility, Williams said the tribe will able to offer "better" services.

"It's going to have more office spaces, better service rooms," he said. "It's a stand-alone building and it's going to show what we're trying to provide for our community."

To find possible employees, the tribe hosted a career fair before the ceremony.

"We had a pretty good turn-out for that," he said. "It will be an ongoing process to hire the proper people for the proper positions. By the time this is open, we will have enough staff to do what we have to do."

When the new health center opens, Williams said it will allow the tribe to give back to the community.

Williams hopes the new center will serve as a "model" for other communities.

"I look forward to people talking about how great our facility is and what were providing here in this small town," he said.