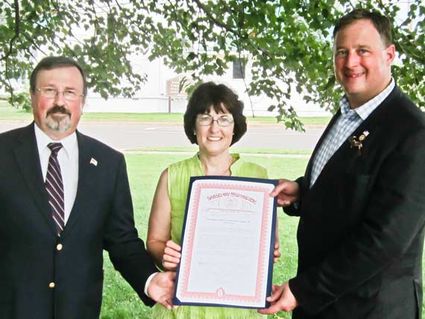 Bergland - The Ontonagon County Commission on Aging received a special commendation from state legislators and the governor on the occasion of the organization's 40th anniversary.

Gov. Rick Snyder, State Rep. Scott Dianda and State Sen. Tom Casperson, in a special tribute, applauded the contributions the agency has made to seniors of Ontonagon County throughout the 40 years.

In the tribute, the legislators congratulated the agency, which they said "has provided oversight of important and essential services for the seniors of Ontonagon County and we are truly grateful for their success and commitment." The tribute explained that operating with state and federal funds through grants from UPCAP and county millage, the Ontonagon Commission on Aging serves as a central planning body for the county in matters concerning the needs of senior citizens and plays an integral part in promoting their independence and well-being.

These Ontonagon County centers provide daytime care for the functionally and or cognitively impaired.

Harris said the services are even more important today than they were 40 years ago. She explained that as the population has shrunk with young families moving elsewhere for jobs, the percentage of senior citizens population has grown.

It leaves fewer young people in the families to care for their aging parents, aunts and uncles. "Although the economy of the county has struggled with the closure of its mine and paper mill, the Commission on Aging has been able to maintain services for the county's elderly so they can remain and prosper in their communities, " she said.

On its 40th anniversary, Harris said she is "very proud to be a part of this organization."