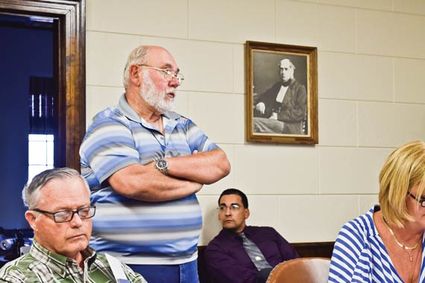 "That's why Mr. (Richard) Duncanson, a licensed medical marijuana care giver, was shutdown," she said. "Medical marijuana dispensaries are not legal in the state of Michigan."

Later, Nelson said she disagrees with city attorney Michael Korpela's claim that new medical marijuana producing business to be located at a former grocery store in Bessemer conforms to the city's zoning code, similar to how she disagrees with Korpela's claim that the medical marijuana dispensary was, in fact, a "transfer point."

Later, residents said they didn't want the business to be located downtown or in Bessemer and are concerned about the affects the business will have on the city.

"It's very close to our schools," he said. "What's their plan on the security of the building? This is not a good message for the community or parents looking at our schools."

Local resident Nate Price said he supports the new business because it will impact the local economy.

"Bring more business and bring more positive things to the community," he said. "Don't knock them down for something that's been proven by medical people, by little kids who suffer everyday. They're not bringing drug people or people in to destroy the community."

According to information on the agenda, the bank previously requested designated parking spots to assist their customers during a planning commission meeting on Wednesday, Sept. 2.

The bank expressed interest in establishing two parking spots on each side of Sophie Street in front of the bank with 30-minute parking limits from 9 a.m. to 5 p.m., Monday through Friday. The commission voted 3-0 in approval.

During Tuesday's meeting, council member Doug Olsen made a motion of support and the council approved the bank's request.

- Nelson said the insurance problem within the council involving her daughter was a "clerical mistake."

Previously, the issue came up when Olsen presented documents of the city's insurance plan and claimed Nelson's daughter was wrongfully on it.

At Tuesday's meeting , Nelson reiterated the fact that her daughter was taken off the plan well before Olsen's claim and Olsen owes her daughter, her family, the council and the city of Bessemer an apology.