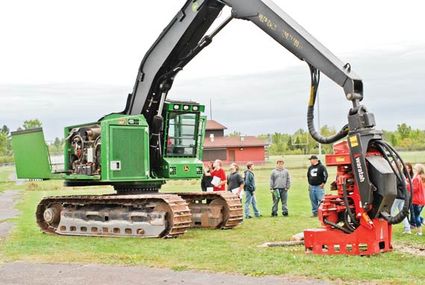 Jared Thompson, right, of Bruce Crossing, answers questions about his processor from students at Ewen-Trout Creek's job fair Wednesday afternoon. Thompson cuts down trees and cuts them apart with his processor.

Superintendent/principal Alan Tulppo said the "career and college fair" was the first of its kind at E-TC and he hopes to do it again.

"The goal was to introduce our students to the different careers they could have in this area. We're encouraging them to go on and get a degree, get some training beyond high school - whether it's a four-year, a two-year, an apprenticeship, whichever the case might be - but don't forget you can have a career right here back in the Western Upper Peninsula," he said.

The school's elementary gym was full of two dozen tables staffed by representatives from various employers and schools.

"We have the forest industry, health and human services, law enforcement and several institutions of higher learning," said Tulppo.

There were also representatives from retail, manufacturing and mining concerns.

"We're hopeful we're going to see some growth in this area in the mining industry with some of the exploration that's been done," said Tulppo.

Tulppo, a 1995 E-TC graduate, was hired this past summer to be superintendent/principal. Prior to that he was a teacher and administrator in Eagle River, Wis., for 16 years.

Tulppo said the day was helping to fulfill a state requirement that part of a high school career involves college and career prep. While E-TC's classes average about 15 students, the senior class has 25 this year and the junor class has 18.

Senior Cyal Wascher spent some of his time talking to representatives from the Ottawa National Forest.

He talked to ONF's Gayle Sironen about the GIS mapping process, asking about the computer displaying the GIS program and the maps laying on the table.

"It's a lot more complex than I thought it was," he said afterward. "There's a lot of different things with the trees and infrared pictures. With the logging, there's different areas that are cut differently, and the maps help with that."

Sironen, an E-TC alumn, said Wascher comes from a family of loggers and they had cut some of the timber on the national forest.

She said she, "tries to marry up the different perspectives, of someone who is making their living off the value of the trees, versus a land management agency which is trying to sustain the value of that timber for future generations. You try to do both."

ONF's Del Platzke, also an E-TC graduate, spoke with students at the table, too. He said estimated the ONF employs more than 200 with offices in Kenton, Ontonagon, Watersmeet and main office in Ironwood.

"It's really nice to be able to answer questions about the forest and the sorts of jobs there are," he said.

Out in the parking lot north of the school, Jared Thompson, yet another E-TC graduate, set up his processor.

Under the name Jared Thompson Trucking of Bruce Crossing, Thompson uses his processor to cut trees down and cut them into 8-foot lengths for the trucks to haul out.

Students asked about the price of the equipment and how to run it, he said.

Thompson did a demonstration for a group. The processor quickly took limbs off the trunk and sawed it into even lengths.

"It's all computer controlled," he said.

Thompson said the machine cost $500,000 and that he used to own a truck, but sold that and started processing in 2014. He works for a company that lines up work for him.