Panthers pounce on Gladiators in OT 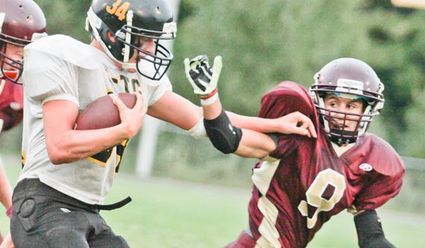 ONTONAGON - Ewen-Trout Creek came from behind in the fourth quarter and won its renewed rivalry game against Ontonagon 12-6 in overtime on Friday.

"We were down 6-0 most of the game," E-TC coach Larry Maki said of the battle between two Ontonagon County schools. "But the boys didn't quit. We ran a lot of plays and kept plugging away, but we had a tough time for three quarters. That No. 70 for Ontonagon (Logan Jilbert) was a beast. We took the battle of Ontonagon County, and the team and the community really needed this win."

Ontonagon coach Ben Mayer said earlier in the week that he had been impressed by the Panthers in a preseason scrimmage. He liked their size and big group of seniors. He thought E-TC might try to out-muscle the smaller Ontonagon team.

"We had some momentum but never really held down the run game," Mayer said. "It was a tough game, but it was exciting for a 6-6 game and a good football game. I didn't think it would be that low-scoring and I was surprised it was 6-6 in the fourth quarter. It's not fun to lose on homecoming and it was a tough loss for the team."

Both teams pound and ground the ball during the game. E-TC rushed 49 times for 271 yards and the Gladiators ran the pigskin 50 times for 172 yards, but both had trouble turning yards into points.

Finally, in the second quarter, Ontonagon's Taylor Beadury made a fine interception of Landon Maki pass at the Ontonagon 36-yard line and returned it 43-yards to the E-TC 21.

Four plays later, Beaudry took a pitch out from Jaden Weisinger and swept left end for a nine-yard touchdown at the 9:16 mark. The conversion run failed and Ontonagon led 6-0.

The lead held up until late in the fourth quarter. E-TC marched into Ontonagon territory, but faced a fourth and nine situation. Maki handed off to Cyal Wascher who took two steps to the right and then handed it off to Alan Goll coming back left. Goll turned on the jets and went 44-yards down the sideline for a score at the 2:31 mark. Once again, the conversion run was unsuccessful, but the game was tied at 6-6.

The Glads recovered an E-TC fumble and matriculated down to the Panther six before regulation time ran out.

Both teams had four chances to score from the 10-yard line. The Gladiators took three plays to reach the 3-yard line. On fourth down, Ontonagon's play didn't go off as planned and E-TC stuffed it.

"It was a blown play and it really hurt us," Mayer said.

E-TC took over on offense and Wascher took a handoff and ran left, but then made a sharp cut towards the goal line. His 10-yard run won the overtime and the game.

"I was nervous there," Wascher said. "As I was running, I was looking for the cutback and saw the hole and the orange flag and went hard for the goal line. It's a great win for us. I went to Ontonagon in seventh grade and now it's E-TC. When it was 6-0, I knew it was a tough battle, but we had to keep working hard and keep going. I'm proud of my teammates. This was our best win ever."

Wascher had a monster night with 223 yards in 33 carries.