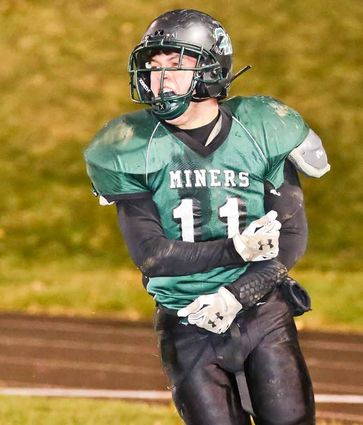 Gogebic Miners' Caleb Greenough celebrates a third-quarter touchdown on a cold Friday night at Massie Field in Bessemer. He rushed for three scores and caught another.

BESSEMER - Playing in some real football weather on Friday night, Gogebic played its best game of the season and rolled to a 38-18 win in its homecoming game.

"It feels good," Gogebic coach Mark Movrich said. "It's been awhile since we won a game. (Aug. 29). I watched a lot of film on Houghton and they gave Lake Linden and Northland Pines tough games. I thought the key was us getting off to a quick start and getting momentum. It would have been easy for us to go through the motions after starting 1-6. But we banded together and I couldn't be prouder of the kids.

"I was concerned because we dominated the first quarter, but then it was 6-6. One wrong play and it could have been 'here we go again.' We always answered the bell tonight. We were really able to run the ball (376 yards) and the line really blocked up front and got to the second level and also pass blocked well."

And the Miners played short-handed with injuries and five suspensions. Movrich gave his team props for fighting back against adversity.

"Collin Gagnon took his first snaps at quarterback yesterday and ran the offense very well," Movrich said. "You have to give him credit."

"We played bad and they played better than us," Boree said. "They wanted it more than us. They played harder and tougher and their backs ran over the top of us.We did not come here ready to play."

Greenough stepped up for the Miners in a big way. On the sixth play from scrimmage, he ran the option with Gagnon, weaved through four tacklers and showed his heels to the defense going 66-yards for a score.

In the second quarter, Houghton tied the game on a quarterback sneak, but Greenough scored on a three-yard run and then Gagnon tossed a 16-yard TD to Greenough as Gogebic went into half-time with a 26-12 advantage.

In the third quarter, Greenough made reservations for six as he scored again from the 13-yard line. Greenough would score three running touchdowns and one receiving touchdown. He carried the pigskin 18 times for 185-yards.

"They really fed me the ball tonight," Greenough said. "But I would have to give it to my team more than myself because they really came to play tonight. Everything here is like the Miner family and I really like playing for the Miners. I played harder tonight, because we really needed the win and it was homecoming. It was definitely one of my best games."

Sophomore running back Brayden Tomes also got a chance to show his stuff as he ran hard and was rewarded with 119-yards on 21 attempts. He also scored two touchdowns.

Ryan Hemming's name was all over the defensive stat chart and he led the Miners in tackles. Freshman Cody Schwartz seems to have a nose for the ball as he recovered two fumbles and intercepted a pass.

Houghton (3-3 WP, 3-4,) takes a ride across the Portage Lake Bridge to take on Hancock in the traditional Copper Bowl on Saturday.