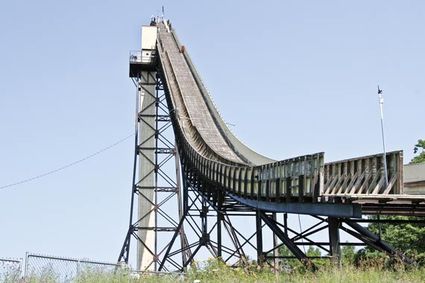 COPPER PEAK, the largest ski jumping structure in the world, is expected to once again host competitions in the upcoming years.

IRONWOOD TOWNSHIP - Ski flying is returning to Copper Peak with a series of competitions.

Representatives of the Federation of International Skiing have awarded Copper Peak a Grand Prix Summer Series finale event to be held in September 2017 and a Summer Continental Cup and a Nordic combined summer event, both to possibly take place in 2018.

The announcement was made Monday.

The September 2017 event is an annual summertime competition on grass or artificial surfaces.

Copper Peak is the only site in the United States, and one of only six in the world, that are able to host elite ski flying events. It will be the only ski flying hill in the world with a plastic surface.

The Copper Peak board of directors will begin plans to renovate the historic site, according to Bob Jacquart, an Ironwood businessman who is Copper Peak's organizing committee chair.

Renovations will include resurfacing the jump, installing an artificial surface landing zone and other enhancements to equip the site for year around ski flying and training.

Recent FIS competitions have only been held at European sites because of the extreme specifications required for ski flying.

Copper Peak's 35-degree, 469-foot in-run (approach ramp of the ski jump) rises 26 stories above the hillside and is the largest ski jumping structure in the world.

"Copper Peak is unlike any other site we considered for these events and will be the only ski flying hill in the summer Grand Pix Series," said FIS Director Walter Hofer. "This unique site, combined with the commitment shown by Copper Peak's board and the larger community, make it a perfect host for our Grand Prix and Nordic events, and a strong contender for additional upcoming competitions."

Copper Peak, located north of Ironwood, hosted the first international ski flying competition in North America in February of 1970.  The last meet was in 1994.

Jacquart said Copper Peak promoters had long aspired to host additional FIS events and the Copper Peak group "had left nothing to chance" in this latest opportunity.

Jacquart said Tunheim, a consulting firm with "a strong practice around intersections of sports and business," has been selected to manage Copper Peak's submissions with FIS.

"This endorsement from FIS is another step toward making sure the world takes notice of what Copper Peak has to offer," said Charles Supercynski, chairman of the Copper Peak board.  "I am confident that with Bob Jacquart's new leadership and vision and the addition of Tunheim, we have the experience to help us make this happen."

Some of the world's greatest ski jumpers and flyers, including Olympic champions from Scandinavia and other parts of Europe, started their flying careers at Copper Peak. From 1970 to 1994, a total of 10 ski flying competitions took place at the Peak.

For decades Copper Peak, and its chairlift rides, have drawn more than 10,000 visitors per year.

Through 122 nations, more than 7,000 FIS ski and snowboard competitions are staged annually. Specific initiatives are undertaken by FIS to promote snow activities, notably for the young.

Ski flying is the term for ski jumping on hills of more than 180 meters.