Miners wrap up season with win over Red Devils 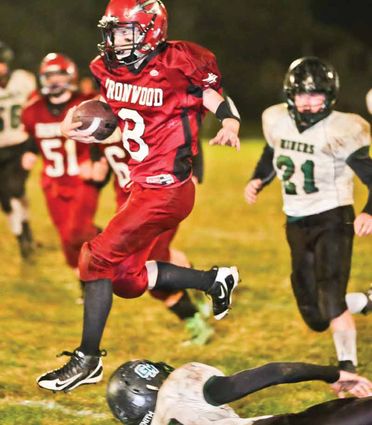 IRONWOOD - Ironwood saved its best game for last, but the Red Devils still were upended by Gogebic 28-0 in a combination rivalry/homecoming/parent's night season finale held on rain-soaked Friday night.

The Miners had been a mystery team this season. They won their first game of the year, lost their next six in a row and then beat a decent Houghton team 38-18 last week.

"It has really been an up-and down season," Gogebic coach Mark Movrich said. "We had some kids injured, played some real good teams and had some bad breaks. And it snowballed on us a little in the middle of the season. I'm happy we played well against Crystal Falls and got the two victories at the end."

Movrich gave credit to the seniors for pulling the team up when it seemed liked the season was on the brink of coming apart.

"We got it together the last three games," he said. "As bad as things were, we hung tough and the seniors were responsible for that. In the midst of it, they really stepped up. I think we started playing for each other."

Ironwood's football fortunes have fallen on hard times lately as the Red Devils have been winless in two of its last three seasons and only won one game in 2014.

Although it has been a tough first year for Ironwood coach Ryan Niemi, he felt good about how the Red Devils played in the their final game of 2015.

"I thought our kids came out and really played hard," Niemi said. "It was a good way to end the season. We finished the season like I thought we could play during the year. We went out and played hard until the end. Gogebic played hard, too."

Niemi noted that just because a team goes 0-9 doesn't mean they are a bad bunch of kids and the coach is moping around in a state of depression.

"I had a very enjoyable first year as a head coach," Niemi said. "I regret going 0-9, but we built some strong bonds with a great bunch of kids. I couldn't be more proud of them. I'd really like to thank our three seniors, Zach Combs, Jon Clemens and and Shane Buckley. They gave us four years of service through some tough times."

Ironwood took the opening drove and marched from its own 22-yard line to the Miner 37 before two five-yard penalties, a quarterback sack and an incompletion derailed the drive.

"Give Ironwood credit," Movrich said. "They drove the ball downfield and punched us in the mouth early. I told our team during the week Ironwood would play hard."

But two plays later, Miner sophomore Brayden Tomes, who has been coming on as a running back, broke loose on a 62-yard TD run with 4:29 left in the first quarter. The conversion pass failed and Gogebic went up 6-0.

Ironwood's defense had given up 396-points (almost 50 points per game) going into game nine, and it looked like the dam might be ready to break again.

As the second quarter began, a Gogebic drive reached Ironwood's six-yard line. Two dive plays brought the ball to Ironwood's one-yard line. On the next play, Ironwood recovered a fumble near the goal-line and the Red Devils were energized.

But Gogebic got the ball back and went 62-yards on a hard-hitting 11-play drive. Colin Gagnon scored on a one-yard plunge after he bobbled the quarterback snap. His conversion run sent the Miners into half-time with a 14-0 advantage.

On the final play of the third quarter, Jacob Suzik took a sweep right and made reservations for six as he sprinted 56-yards to give the Miners a 22-0 lead.

In the first series of the fourth quarter, Suzik was at it again as he broke through the line and out-ran the secondary on a 51-yard scamper that capped the scoring at 28-0.

Suzik led all rushers with 107-yards on only three carries, while Tomes added 94-yards on 15 attempts.

Ironwood's Zack Combs ran hard and made some impressive cuts as he ran for 87-hard earned yards.

The green-and-white concluded its season with a 3-6 record.

Niemi was hoping a win would be a springboard the Red Devils could build off for next season, but Ironwood finished the year with a 0-9 record..