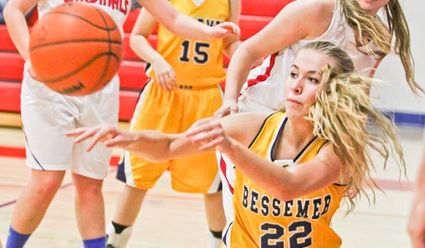 "The key was our press-they had a tough time handling it," Cardinal coach Bruce Mahler said. "We went with a full-court press the whole game and when we get the ball we will run all the time. We're a running, pressing team as much as we can. The other key in the game was Rachel Obradovich's defensive play on Rachel Mazurek and Jordan Mazanec when they came inside

"It was a very physical game, but that's typical of a Bessemer/Wakefield-Marenisco game, but it evened out in the end. We don't have size, but we'll play physical, too."

"We had 20 plus turnovers in the first half and over 40 in the game," Pelissero said. "We played ragged. We tried to throw the ball through them rather than around them. We had one guard out and Allyson Metas was in foul trouble since the first quarter.

"It was a very physical game, but basketball is a contact sport. We had some good performances. Rachel Mazurek gives 100 percent and is solid. Rachel Emery was solid making free throws and Caitlyn Lynch had nine points and played well."

The Cardinal press kicked in at the 6:47 mark of the first quarter when Hallee Yon made a left-hand lay-up off a steal.

Bessemer responded quickly when Allyson Metas made a razor-sharp pass to Caitlyn Pelissero inside for a score.

But W-M's aggressive press began to take effect as Darienne Korpi scored on a long pass from behind and Saundra Libertoski slashed down the middle of the defense for two and the Cardinals went up 13-4 with 1:14 remaining.

Mazurek and Caitlyn Lynch narrowed the lead to 15-8 by the end of the quarter.

W-M was out and running in the second quarter as Cardinal Alexa Jilek's putback gave W-M a 22-8 advantage with 3:58 in the quarter.

W-M's press harassed Bessemer, but the Speedgirls still played hard and hustled. Mazurek knocked down a 15-foot jump shot and sank two free throws, but Heather Hemming's hit a shot from the baseline to send W-M into half-time with a 27-15 lead.

Starting the third quarter, Lynch made a put-back and Metas scored when she picked up a loose ball underneath.

But Kassidee Yon scored and Rachel Obradovich scored twice, the last one coming as she was falling down and shot from her knees.

When Korpi scored inside and added a free throw, the Cardinals had a 45-29 lead with 5:54 remaining.

Bessemer fought back one more time as Rachel Emery and Mazurek canned six free throws and Mazurek made a base-line drive and somehow made a running one-hander and Bessemer whittled the lead to 49-41 with 1:52 left.

But the W-M press allowed Korpi to seal the deal with a shot from the elbow that made it 54-41 with 41.2 seconds remaining.

"We got a good team effort today," Mahler said. "Since Lauren (Grace) is out, some of the girls have really stepped it up and played some quality minutes."

Mazurek was Bessemer's top gun with 15-points and Emery notched 12.

The Cardinals (2-0) travels to Ontonagon in a key Copper Mountain Conference match-up on Tuesday at 7:20 EST.