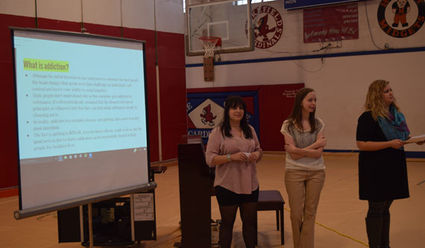 WAKEFIELD - As winter break approaches, the Alcohol Drug Abuse Prevention Team Thursday taught students in the Wakefield-Marenisco School District dangers of addiction and consequences of driving under the influence.

Together, their mission is to to educate the area about drug and alcohol use, to bring awareness to issues that alcohol and drugs raise and to promote a healthy and safe lifestyle.

To teach young adults these goals, ADAPT team members teach facts about alcohol and drug use.

Mathias told students to raise their hands if they had drunk alcohol before. Several hands went up.

"People who drink before the age of 15 are more likely going to develop alcoholism later on in life," she said.

With that in mind, Mathias explained how people can become addicted. She said genetics plays a significant role in the probability of young adults drinking and possibly becoming addicted.

"If a parent drank around you, you're more than likely going to drink when you grow up," she said.

Mathias said mental illnesses and an individual's environment can cause people to become addicted to drugs or alcohol.

"If you don't know how to handle something and you keep suppressing something, that's breeding grounds for addiction," she said. "Who you surround yourself with has a huge influence on your life."

To connect with the audience on a personal level, Mathias and Higgins told personal stories of how abuse affected their lives.

Mathias said she was exposed to alcohol and her life changed when her brother passed away when she was 14.

"I went into denial and a didn't know how to deal with it."

Over time, Mathias said she became depressed and then began drinking "a lot."

Mathias said she surrounded herself with "all the wrong people" and they partied together. She said she got behind the wheel one night when she was drunk and fell asleep. When she woke up, she had hit a tree and totaled her sport utility vehicle.

"I was OK; there was not a scratch on my body," she said. "I remember the smell of the airbags. That was the awakening point in my life," she said.

With a tear, Mathias said she sat in jail and re-evaluated her life. Looking back, Mathias encouraged students be safe and responsible.

Touched by Mathias's story, Higgins said she was also exposed to alcohol at a very young age and started drinking to "fill a void.

"(Alcohol) affected me graduating, because all I wanted to do was party," she said. "When I was 17, I got my first drunk driving and lost my license."

Higgins is now 26 and has been fighting to get her license back. She said getting a drunk driving charge affects everyone.

"It's not fun. I've lost a lot of friends to drinking and driving," she said.

Higgins said her friend died at a party, and "nobody did anything about it.

"You're going to have to live with that for the rest of your life," she said.

Rather than drinking and driving, Higgins said people should take cabs or call their parents for a ride home.

"Your parents would rather see you alive than hurt somebody," she said.

Wanink said students should find a friend who can watch their backs and make sure they're safe when in unfamiliar situations, like parties.

When members of ADAPT finished their presentation, the team invited students to participate in a drunk driving test simulation while wearing "drunk goggles" that made it difficult to see clearly.

One after another, students had trouble walking in a straight line wearing the "drunk goggles."

"This is what's it's like when you're intoxicated," Perlberg said.