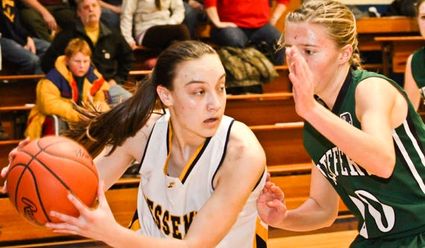 Bessemer's Rachel Mazurek looks to drive to the basket during Friday night's game at the House of Noise in Bessemer.

BESSEMER - Bessemer wanted to give their fans an early Christmas present, but a good Jeffers team would have no part of it and thumped the Speedgirls 61-31 in a Copper Mountain Conference game in the House of Noise on Friday night.

"Bessemer is a good young team that is impressive on the inside and has good coaching," Jeffers coach Joe Romano said. "But they couldn't handle our press, especially early on. Every game, we usually go with a man-to-man press, But Bessemer is tall, so it was zone press. You have to give the girls the freedom to go after passes and the ball.

"But our running game is the biggest part of our game. We run-and-gun because we're so small."

"Our scouting report said they could shoot and we couldn't leave them alone," Pelissero said. "It also said they were good free throw shooters. The report was accurate, they made 13-14 free throws in the game."

The Speedgirls actually took the lead right off the bat. Rachel Mazurek made a steal and passed ahead to Allyson Metas for a lay-in.

But then the Jets put on their 2-2-1 press and it immediately paid benefits. Julia Nordstrom, who is quick as a hiccup, made a steal and a score and two more Jeffers' steals gave them a 6-2 advantage.

It was turnover city for Bessemer as they committed 11 turnovers in the first quarter and 16 by half-time.

The second quarter started when Jeffers' Eden Klemett made a running one-hander while driving to the basket. Right after that, Lindsey Johnson intercepted a pass near the basket on the press. As she was going out-of-bounds, she flipped the ball over her head into the waiting arms of Eden Klemett who scored easily and the Jets went up 29-11 with 5:20 remaining before half.

"But we settled down after that," Pelissero said.

Nine seconds into the third quarter, Eden Klemett buried a 3 from the left wing. But Pelissero responded by getting behind the Jets' press and scoring.

Back and forth it went. Jeffers would hit a 3-ball, the Speedgirls would break the press and Ivy Klemett and Rachel Mazurek would trade off on a pair of free throws.

The game was never in doubt any longer as Jeffers came out running in the fourth quarter and scored eight straight points in the first two minutes.

"We're 1-4, but we've played some pretty impressive teams so far and we have 15 games left."