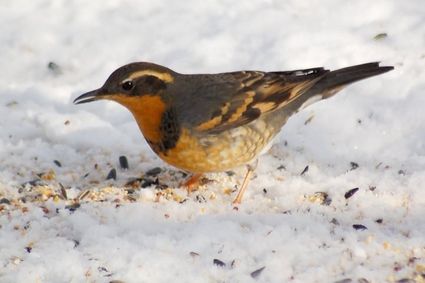 A VARIED thrush was among the rare birds spotted Saturday during the Gogebic Range Christmas Bird Count conducted by Jerry Edde. It's a bird that usually inhabits Western states, but Joanne Liimakka, of Wakefield, has been hosting one.

for the Daily Globe

"We were heading south on Lake Road when my wife shouted, 'That looked like a turkey! No, really, I think that was a turkey. Stop and go back."

I quickly checked the rear-view mirror for following traffic and the little SUV slid to a stop with the anti-locking braking system pumping furiously.

A quick turnaround and I was soon looking at a front porch that was sort of an elevated deck.

"No," I said, "That wasn't a turkey. It was seven turkeys and it looks like they're all living under that front porch."

Wild turkeys seem to be becoming quite common locally and they really appreciate the seeds many folks provide them during our long and snowy winters.

We had begun our 2015 Christmas Bird Count adventure in Wakefield. The morning was overcast and it was really snowing quite heavily, with poor visibility.

Most birds were holed up in sheltering conifers somewhere, trying to stay dry.

As we were passing Lahti Street, I looked up to see a birch tree that was "decorated"with more than 100 birds, all regularly spaced like Christmas tree ornaments. Grabbing my binoculars, I could see each bird had a crest and a black mask on a beautiful brown background.

The few birds that were either facing away from me, or sideways to me, displayed white spots and vertical yellow bars on their wings.

"BOWA" I wrote in my notebook (Bohemian waxwings).

By counting groups of 20 or so, I estimated there were about 150 in this single tree.

Our spirits renewed, we drove on to Bessemer. Stopping at home for lunch, we were doubly rewarded with a pair of Cardinals at our feeder, and just as we were headed out the door, I got a call from my nearby neighbor, Dan Pertile.

He told me a story about a coyote hunt he had just completed that day using a squealing rabbit call to attract the predators. The hunters had just settled in when a Red-tailed hawk had landed in a nearby tree, obviously looking for "the rabbit."

Pertile watched the hawk sail away when it decided something might be fishy about that rabbit.

Red-tailed hawks certainly nest in our area, but rarely, if ever, over-winter. The expectantly mild weather we have been having probably has kept many birds around longer than normal.

Later in Ironwood Township, we were treated to a "conspiracy" of ravens, 19 in fact. They had discovered a dead deer, or some other unfortunate critter, and had gathered for lunch.

Winding our way home again, we turned up Tilden Road just as it began to get dark. Suddenly, a bald eagle flew across the road and out over the old mine pit; a great way to end the day.

Well not exactly the end, for now I arrived home to begin receiving phone calls from my loyal Christmas Bird Count volunteers.

One of the first callers was Joanne Liimakka, of Wakefield. I was anxious to learn if the Varied thrush she had reported to me earlier was still around. Sure enough, it was sighted at her feeder and the bird joined the count as the first of its species in the history of the local count. This was a very special sighting as the beautiful bird is a Western U.S. inhabitant only seen a handful of times during any one year in Michigan.

I thanked Joanne for sharing this sighting.

Mild weather - and some good bird seed provided by Joanne- has encouraged this vagrant bird to stick around in Wakefield for a few days.

In all, 20 observers helped Christy and I make the observations, all within 7.5 miles of the stoplight in Bessemer.

The following birds showed up in the annual Gogebic Range Christmas Bird Count, involving calls from a 7.5-mile radius of the U.S. 2 stoplight in Bessemer: 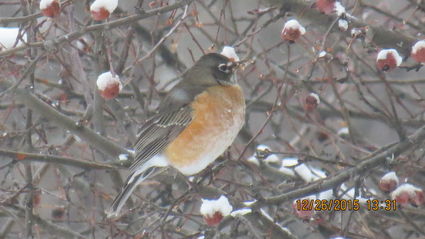 A ROBIN is still visiting the crabapple tree at the Joe Bonovetz residence in Bessemer. Bonovetz snapped this bird on Saturday during the annual Gogebic Range Christmas Bird Count.

Also, Northern shrike and Rose-breasted grosbeaks were seen during the count week, but not recorded on Saturday.