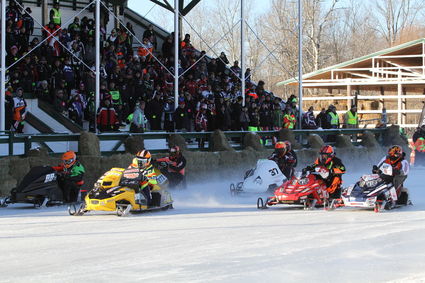 A good crowd turned out for the Ironwood Snowmobile Olympus on a sunny Saturday at the Gogebic County Fairgrounds in Ironwood. Racers include from left: Bret Murkowski of Athens, Wis., Cody Knutson (98), Danielle Behn of Waupaca, Wis., Tyler Lyberg of Minnesota, Tyler Schmidt of Merrill, Wis., and Beau Vanstrydonk of Tomahawk, Wis. See page 8 for more on the races.

IRONWOOD — The Gogebic County fairgrounds were the place to be this weekend as hundreds of the best drivers in vintage and modern ice oval racing rocked around the historic 1/2 mile track at speeds up to 100 MPH at the Ironwood Snowmobile Olympus this weekend.

Even the women and kids got into the act and a drone even showed up to check out the action.

And for the first time in three years, there was snowmobile racing on Sunday when many of the important races take place.

Race director Tom Auvinen and public relations coordinator Brett Richter, were both pleased as the rave reviews started pouring in.

"The whole thing went very well," Auvinen said. "Happy with the turnout, the races, the crowds, the ice holding up considering the weather we've had and nobody got hurt. It was successful because of the great people we have as volunteers, sponsors and the local community support."

Richter said a lot goes into making an event as big as the Ironwood Snowmobile Olympus a success.

"It was definitely successful," Richter said. "The racers go through a number of different experiences while in our area such as lodging, registering, the on-site track services, food and beverage people and services. They say great things about Ironwood and we keep the prices low for the fans.

"The momentum is here for returning Ironwood to prominence in the ice oval racing world."

Saturday dawned with bright blue skies and excellent racing conditions. It was as if Mother Nature figured it owed the Olympus a weather break after windy, snowy weather forced the cancellation of the final Sunday of racing the past two years.

Auvinen and Richter have always stressed driver safety is most important with them.

One of the most popular finals on Saturday was the GPR F-500 or Jim Adema Memorial Cup.

Adema is still remembered as the driver who was tragically killed in a weather-related snowmobile accident in Ironwood in 1975 that left behind his wife, Patty, and their two young children.

Patty (Adema) Sennecker returned to Ironwood last year for the the first time since the accident. Not in attendance this year, Sennecker still supports the race.

Jason Boyda, of Winnepeg, Canada, drove 10 hours to Ironwood to win the $500 first prize and unique trophy that changes each year.

"I've been making the trip for five years," Boyda said. "I wouldn't come back if the race wasn't so excellent. The hospitality of all the people is great and the ice track was very good.

"Jim Adema was the man back in his day, so to get something with his name on it is special. And the competition is so good in this race."

Considered one of the most important races of the first day was the USSA Champ race, Matt Schulze, of Wausau, Wis., was only too happy to take the checkered flag in the 15-lap race.

"This is a champions race that is considered very important," Schulze said. "This was a good start to racking up points for the season. It started out as a tough day. My main sled blew up and I won on my back-up sled. Obviously, it still ran good. It's pretty dang close close to my first sled. I got the hole start (the lead) and led the whole race. I knocked off the laps and just hoped everything stayed together. No one made a run at me. By the way, this is a great place to race."

If there was a snowmobile olympus MVP, Schulze was it, as he also won the TLR Cup Champ race on Sunday. For a snowmobile driver, this is pretty close to winning the lottery two days in a row.

"I've never had back-to-back wins in the same event," said the 31-year old Schulze. "This is my first time doing it and it was pretty cool. We ran the new sled and it was a good sled. This was a good confidence-booster. We'll try to keep the momentum going for Eagle River (world championships)."

Sunday was a big day for 19-year old Jerry Brickner, of Antigo, Wis., who won the big Combo F500-600 Sportman final on his Polaris.

Ironwood's Richard Strand and his son, Dave, were the highest local finishers as Richard finished fourth in the Super Stock Liquid - FA and David took the fourth spot in the 440 F/A Liquid. Both rode Polaris sleds and Richard had his driving skills tested.

"I qualified second in my heat, but I had no luck in the finals," Richard Strand said. "I got cut off twice and flew over a hay bale. I still finished fourth. I was exhausted when I was done driving. But I know the guys really worked hard to get the track in shape."

One of the highlights of the the Ironwood Snowmobile Olympus was to be the hosting two wounded soldiers no longer in the military. It's called the Wounded Warriors Project and it turned out to be a bittersweet experience.

Paul Purpey, of Stanton, Mich. was enthusiastic about coming to Ironwood with his family. But the day he was to leave for the U.P., his father suffered a heart attack and needed to be hospitalized. Purpey was forced to cancel his trip.

Pablo Moran, of the Chicago area, told Richter he would be coming but did not return repeated phone calls. But the wounded warrior showed up on Sunday morning and was well-received by the good-sized crowds.

Moran, a 13-year Marine veteran, was called "a great American" and he said he was "appreciative" of the support and welcoming nature he felt from the spectators.

"The Wounded Warrior Program does so much to help us get acclimated back into society," Moran said.

Moran helped with podium duties and Richter said he visited the teams and exchanged shirts and autographs.