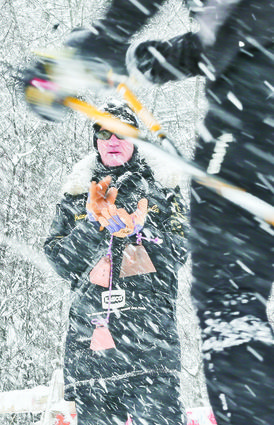 Volunteer Jim Decur of Ironwood encourages a skier crossing South Range Road in Ironwood during the Sisu Ski Fest Saturday. For more information on the Sisu see pages 8 and 9.

IRONWOOD — Sisu VII came up lucky seven as weather and skiing conditions were nearly perfect to complete the Sisu Ski Fest on Saturday.

No doubt the Sisu deserved a weather break and race director Jonathan Rulesh was only too happy to get it.

"Sisu really came off well today," Rulesh said. "It's been real positive and had real good success, no complaints. We were focused on the low snow this year, but the late snow really saved us. The late snow slowed the course down today, but it made the course safe and fun for everyone. Then all the volunteers, the downtown area and the whole community pulled together for the Sisu.

"The weather today wasn't too hot or too cold (20 degrees was perfect when the first racers went off)."

Veteran skier and Sisu committee member Paulette Niemi looked at it another way.

"A week ago we had rain, warm temperatures and lack of snow," Niemi said. "It was an El Nino winter. But that little bit of snow really helped the grooming. A big thanks goes out to all the volunteers who made it a great race. They literally pulled off a miracle"

If Rulesh and Niemi sound a little obsessed with the weather, consider the Sisu recent weather history.

In 2013, the whole ski racing event was plagued by by rain and melting snow and had to be cancelled.

In 2011, the Sisu Ski Fest ran into strong, cold winds and at least 3-4 inches of snow in near blizzard conditions as the Sisu more than earned its name for needing toughness and determination.

Many of the ski racers finished with much slower times and had snow and ice stuck to their faces. Some said it was the toughest marathon they had ever competed in.

Last year, the possibility of lingering very cold temperatures and inclement weather threw the Sisu VI for a loop. Race officials (and the race jury) announced the 42K full-marathons races would be shortened to 31K and the 21K half-marathons would be reduced to 17K events.

The full-marathons had a 90-minute delay in its starts, while the half-marathons were delayed 30-minutes.

Race officials said the decisions were made to insure the safety of the skiers and all the volunteers who could be on the course for hours.

Few disagreed with the decisions, but all involved in the races seemed resolved to have "a full course" in 2016 with "a normal Sisu."

On Saturday, normalcy returned as ski racers skied through the historic mining areas, scenic bluffs, along the Montreal River and by the World's Tallest Native American statue towards the new "Finnish Line" in downtown Ironwood.

And on Saturday at 8:30 a.m. (Sisu starting time), the temperature was down to 19 degrees and it kept dropping. Heavy snow fell at times during the event.

Matt Liebsch, 32, of Orono, Minn., likes to joke around and say he skies at the Sisu for the free pasties at the end of the race. But he has been known as one of the best skiers in the Midwest, since he won the 2009 Birkebeiner freestyle marathon that had 3,327 racers in it.

And Liebsch won the Sisu full-marathon freestyle race for the second year in a row. He won in 2:01:40, which was the fastest time overall of any skier at the Sisu.

"I skied better this year," Liebsch said. "It was super fun and I love the marathon course and the spectators. Really nice. Alex Vanias was chasing me. I thought he was about 10 seconds behind and I had to kick it in the last one or two K, because he was coming on.”

Chris Pappathopoulos, 35, from Sun Prairie, Wis., has a name long enough to fill up the first line of his story (19 letters).

And he has his share of tough breaks at the Sisu.

"I somehow took an extra lap on the track here, but I learned from that mistake," Pappathopoulos said. "And in 2014, they had the photo finish right at the end of the marathon. But I really was skiing hard at the end and could have caught the two guys at the finish line. It could have been a three-man finish."

"There wasn't a whole lot of snow out there, but they did a great job of grooming it, a fantastic job" he said. "This is the first marathon of the year, so I wanted to get off to a great start. I had competition on the first loop, but then I pulled away. No photo finishes."

Jan Guenther, 56, of Long Lake, Minn., was pretty fired up after winning the women's freestyle marathon in 2:23:54.

"I love skiing, I love the area and I love the trails," Guenther said. "I love skiing in these snow conditions. The grooming was impeccable and the course is interesting, It starts off hilly and then completely changes after 24K. This is what skiing should be."

Guenther said that at age 56 it was getting tougher to compete with the younger women.

"I tried really hard today, because these younger girls are getting so good," Guenther said. "But it was a fun, wintry day and my technique was great today."

Paulette Niemi, 48, of Ironwood, was the top local ski racer at the Sisu with a fourth-place finish in 2:30:20.

"I put a lot of time and effort into my training, so I like to see some results at the race," Niemi said. “My goal is to make the top five."

"I race hard and physical and I didn't have any other women to race with," Leask said. "Everyone was far away and it's mentally harder to race when there's no one around. I tried to ski with some guys that went by. I didn't get a good night's sleep and my lungs hurt and my muscles cramped up. I'm hurting, but don't get me wrong, I'm really happy, too. This is a great place to ski."

Sandra Pera, 54, from Wakefield, was the top local finisher in this race with a time 3:45:57, which was good for eighth place.

Josh Doebbert, 26, of Minneapolis led from start to finish and crossed the "Finnish line" in 1:06:02.

"The race went real well," Doebbert said. "I went out hard and opened up a gap. I felt relaxed but I didn't want to get too relaxed, so I kept my foot on the gas, too. There were great conditions all-around, but things slowed up when it was snowy and it softened up. This was my second Sisu and my best one. I'm pretty stoked."

Seth Mares, 20, was back from Saratoga Springs, N.Y. and Michigan Tech University and he won his second consecutive Heikki Lunta Half-Marathon in 1:15:22.

Mares moved from New York to Ironwood a few years ago and enrolled at Gogebic Community College. He wanted to get an education and ski for the GCC Nordic Ski team. But not long after he arrived, the program was discontinued, but Mares stayed on at GCC and is now enrolled at Michigan Tech.

Mares said another reason he stayed was because he enjoyed the snow so much and now he is one heck of a Sisu ski racer.

"I skied with a couple of guys and then I picked it up and it paid off," Mares said. "The conditions were good for me. I'll be back. I really like the race and it's a lot of fun."

Ironwood's Emmy Tuzee skied well and finished in fifth place with a time of 1:22:51.

Sarah Wade, 18, of Houghton. Mich., easily won the half-marathon women's classic and seems to have a bright future in skiing and in the career world.

"I go to school at Michigan Tech for both the academics and the skiing," Wade said. "I'm majoring in mechanical engineering and computer engineering. My friend, Seth (Mares), told me about this race. I didn't know if we both could win and we did. It was a lot of fun. I hope to be back next year."

Despite being only her second half-marathon ever, Wade had developed a strategy to win.

"On the first hilly 5K, I went ahead hard," Wade said. "In the middle, I stayed with everyone else and even met a guy from Michigan Tech and in the last part I picked it up again."