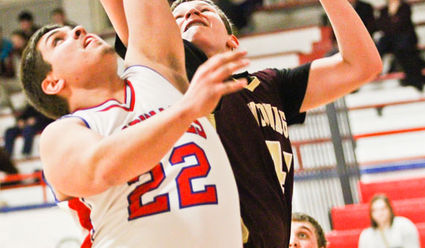 WAKEFIELD - Wakefield-Marenisco continued its winning ways with a 69-61 victory over Ontonagon in a Copper Mountain Conference match-up in the Cardinal Gym on Friday night.

As the season passes it midway point, the Cardinals have answered most of the questions about just how good are they.

They now have a sparkling 11-1 record, are firmly entrenched in first place in Porcupine Mountain Division with a a 8-1 record and are coming off solid wins over two good teams in Chassell and Ontonagon. They are also ranked fifth in the latest U.P. Class D boys basketball poll.

The question in the second half of the season will be how W-M handles its new-found success. The Cardinals will no longer be able to fly under the radar screen and teams will be gunning for them.

"Teams will get fired up for us and there will be more pressure on us," W-M coach Terry Fetters said. "Every game will be a big game for us and we'll have to come out and match their intensity."

"The game was like a roller-coaster ride," Ontonagon coach Kurt Lehmann said. "The key was that it was a game of runs."

Ontonagon's Taylor Beaudry was a good example of this. He can be a very quick point guard weaving in and out of traffic on his way downcourt. He can penetrate down the lane and dish off for an easy two or take the shot himself. Or he can try to do too much and have the ball slapped away or lose it to a defender.

After getting equal opportunity scoring from its team members, W-M built an 18-7 first quarter lead, but Beaudry drove the middle with 29.1 seconds left in the quarter and rolled home a lay-in.

Starting the second quarter, Collin Gagnon buried a top-of-the- key 3 to open up a 21-7 advantage, but Beaudry and the rest of the Gladiators surged back into the game and trailed 27-23 at half-time.

The third quarter was fast-paced and at times, too fast-paced.

The game continued close until Beaudry was whistled for a technical foul as he ran downcourt. Soon after, Ontonagon was hit with a bench technical.

The Cardinals shot their technical foul shots and got the ball back and W-M moved out to a 48-36 third quarter lead.

Both coaches agreed the technicals changed the score but also the atmosphere of the game.

"The technicals changed things up, the momentum and we lost a little fire," Lehmann said. "They made runs a little bigger than ours. In every game, we lose momentum and can't get it back. We've lost close games all year. It was a good game except for the two T's and we got a little out-of-control. We played good for two quarters."

With 3:48 left in the game, Gagnon drove in hard from the left side and slammed down a reverse lay-up. As he did, he let out a loud yell as he had just scored the 1,000th point in his four-year varsity career.

"That's a big milestone," Fetters said. "Collin came up as a freshman and worked real hard. People don't see how hard he practices. I'm proud of him. When he came to the bench, he thanked all his teammates."

W-M won the junior varsity contest 48-40 over the Gladiators.

Ontonagon (3-7, 3-4) travels to Dollar Bay for another conference game on Friday.