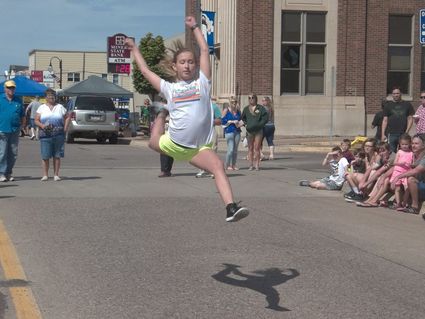 During the Maxwell Street portion of the Ontonagon Labor Festival, a Lip Sync contest was held. Cecilee Brookings took second in the High School Division, but would have scored higher with this leap, if it was still track season. Winning the high school division was sister Shania Brookins. Collette Brookins won the pre-school competition. The elementary division was won by Dyceson Drew, followed by Adam Graff and Joel Davis with third place won by Steve Graff and Paul Davis. The adult division was won by Mary Frank, second Kristy Dobbins and third Hank Johnson.

ONTONAGON - Huge crowds and great weather ushered in the 60th anniversary of the Ontonagon Labor Day Festival in Ontonagon over the weekend.

It was estimated that 5,000 people lined the streets for the large Festival Parade on Sunday as floats and bands made their way down River Street.

Competition for float prizes was stiff and the Norwich Country Club with its "Dukes of Hazard 39 years later," float scored first place in the open division. All the Dukes of Hazard characters were there. Boss Hogg had his own car as did the ever chasing police. The Daisy Dukes, cousins Bo and Luke, Enos the...