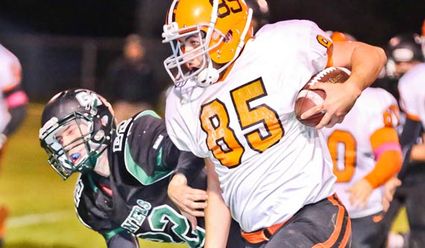 Hurley's Ryley Eitrem, right, breaks away from Gogebic Miners' Jacob Suzik during Friday night's game at Massie Field in Bessemer. Eitrem received a pitch from Tim Buerger, but Gogebic tackled Eitrem at the 5 as time expired in the first half.

BESSEMER - Hurley's potent rushing attack was too much for a shorthanded Gogebic Miners squad as the Midgets won the non-conference meeting 42-6 Friday night.

The Midgets rushed 55 times for 455 yards and had 21 first downs to five for the Miners as Hurley improved to 8-0 against the Bessemer/Wakefield-Marenisco co-op.

"Hurley, they're a good team," Gogebic coach Mark Movrich said. "They've been the program of consistency on the Range for Lord knows how many years. Even had we been 100 percent healthy, we know we would have been in for a dogfight. That didn't make things any easier."