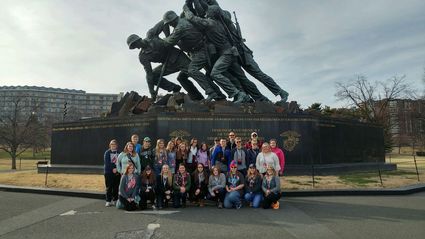 WASHINGTON D.C. - Among the crowd on hand to witness Donald Trump's presidential inauguration Friday were a group of Ironwood Area School students who traveled to the nation's capital to witness the historic occasion.

"(The trip) was probably a once-in-a-lifetime experience that we probably won't get the chance to do again," Senior Kacie Lundin said.

Lundin was one of 26 Ironwood students in grades nine through 12 to go with social studies teacher Gordon Erickson and two other chaperones on the three-day trip.

Television screens in each section provided spectators with a close-up view of the ceremony.

Neither said they were particularly political prior to the election, but both said they tried to follow the race.

"Getting closer to the election, I started looking into (the race)," Mead said, adding she mostly used Facebook to follow the coverage.

"I just (followed it) as I had time," Lundin said. "Because I'm in sports all the time, I'm rarely ever home to watch (the news)."

One of the most striking parts of the ceremony for Lundin and Mead was the number of people there and the different views they held.

"It was kind of a culture shock to see that many people. We don't see a lot of people in Ironwood, and if you don't get out of town a lot you don't really see more than we have in our little town at a border bowl game or something." Lundin said. "It was really cool to see different people's viewpoints and what they stand for."

Julie added it was interesting to see the reactions as different people came onto the screen during the ceremony.

While she may have appreciated witnessing the historic event, Lundin said one inauguration was enough for her - citing the rain and long wait.

"We watched it on a TV anyway," she joked.

While the inauguration may not merit a return, both said they hope to visit Washington D.C. again in the future - preferably with a more relaxed pace.

"I think I would go with my family, so we could take our time at places and actually see more of it." Lundin said.

Lundin's favorite part of the visit was the United States Holocaust Memorial Museum, while Mead's was the Jefferson Memorial and the view of the nearby Washington Monument.

With an already tight schedule, mechanical issues with the Green Bay to Chicago flight forced the group to drive to Chicago and further cramped the itinerary - which led to them not getting to see everything they planned to.

The events surrounding the inauguration and the women's march the following day also forced the group to change plans.

"This was no ordinary weekend. You had Donald Trump on Friday and 500,000 women on Saturday," Erickson said, explaining the inauguration concert closed the Lincoln Memorial and the Smithsonian museums were inaccessible through the marchers Saturday.

The protests surrounding the inauguration also added a unique aspect to the weekend.

While some of the students may have sympathized with those protesting the ceremony, both Mead and Lundin agreed they all decided to keep a low profile and avoid controversy.

The extra walking needed to bypass the protests was maybe less appreciated by some students, according to Lundin and Mead, with the group walking over 12 miles Friday.

While circumstances may have dampened the enthusiasm for the actual ceremony, Erickson agreed with the students that it was still a once-in-a-lifetime opportunity.

"The Super Bowl, the World Series, Stanley Cup; this is up there. The inauguration is up there," he said. "I recommend every American, someway, somehow, get to one."