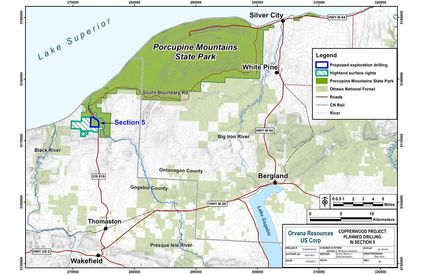 THE ABOVE map shows a one-mile-square area on the western edge of Porcupine Mountains Wilderness State Park in Gogebic County where Highland Copper has begun test drilling.

WAKEFIELD - The Michigan Department of Natural Resources issued a use permit to Orvana Resources U.S. Corp., a subsidiary of Highland Copper, to conduct exploratory drilling.

The drilling is on a one-mile-square piece of property situated along the westernmost edge of Porcupine Mountains Wilderness State Park in Gogebic County.

The drilling began Sunday and is scheduled to continue into early March, depending on weather conditions.

"This drilling project will affect a very small portion of DNR-managed land," said John Pepin, DNR deputy public information officer. "The vast majority of the park, including the Presque Isle River, will remain unaffected by this exploration activity."

If the exploration results indicate the potential for copper in suitable quality and mineable quantities, Highland Copper would conduct a feasibility study, designed to mine the deposit entirely by underground methods, Pepin said. That would allow the company to gain access to the copper ore body from land it owns outside the park.

Any potential mining of the minerals would require a separate regulatory process through the Michigan Department of Environmental Quality.

Highland Copper would need to amend its existing permit and prove to the DEQ that, if the area were mined, no material damage would occur to state-managed park surface features, Pepin said.

"Highland Copper has worked closely and cooperatively with the DNR, making every change to the company's drilling plan the DNR has requested," Pepin said. "Several provisions have been put in place to minimize the impact to the land surface during the drilling project and to provide proper protections to natural resources to the greatest extent possible."

Each drilling site will have a drill pad of roughly 25 by 60 feet. Drilling will be completed using a tracked drilling rig along existing roads, where feasible, to limit disturbance to natural resources.

The drill holes will be about 5 inches in diameter. Depths will range from roughly 150 feet to 1,000 feet below the surface.

Pepin said actions to be taken by Highland Copper to reduce the impact of drilling include:

-Operating only on frozen ground to prevent or reduce surface disturbance.

-Using existing roads, including two-tracks, for access and test hole location when feasible. Any new routes will avoid steep slopes or tree removal and minimize erosion.

-Using specialized tracked equipment to reduce surface disturbance and minimize the number of trips within the park.

-Avoiding cutting trees where possible; where trees are damaged, the state will be reimbursed for those trees at current market value.

-Working with an on-site DNR Parks and Recreation Division employee to inform any decisions made regarding alternate access routes, surface disturbance or tree removal.

Highland Copper is a Canadian exploration company focused on exploring and developing copper-silver projects in the U.P. including the Copperwood Project in the Gogebic County, the White Pine North project, located about 22 miles to the east in Ontonagon County, and the Keweenaw Project in Keweenaw County.