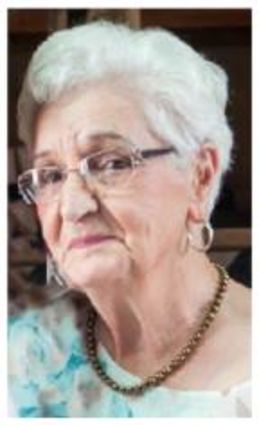 The former Rosemary Lamerand was born April 11, 1925, in Saxon, daughter of the late Edward and Anna (Fafford) Lamerand, and graduated from Saxon High School in 1942. Following graduation, she was employed in factory work in Milwaukee for several years.

She was united in marriage to Rodman E. Anderson on April 15, 1944, at St. Ann's Catholic Church in Saxon. Together, they raised their children on the family dairy farm and worked it together until Rodman's death on July 19, 1976. Rosemary continued her chores on the farm until her retirement in 2000.

She was a lifetime member of St. Ann's Church and the Auxiliary to Mercier-Kero American Legion Post 371. She loved going to the casino and enjoyed playing smear in local tavern smear leagues. She also volunteered at Senior Center meals for years and was an avid Brewer, Badger and Packer fan. An excellent cook and baker, her apple pies were legendary. Coffee klatch, complete with goodies, was always at 4 o'clock in the afternoon at the Anderson farm.

Rosemary will be dearly missed by all.

Besides her parents and husband, Rosemary was predeceased by a son, Bruce, in 1996; grandsons, Bronson Anderson and Montgomery Innes; son-in-law, John Innes, in 2010; and sister, Betty Jane Lamerand.

A Mass of Christian Burial will be celebrated Saturday, Feb. 11, at 11 a.m., preceded by visitation at 10 a.m., at St. Ann's Church in Saxon, with the Rev. Frank Kordek OFM, celebrant.

Rite of Committal and interment will be in Lakeview Cemetery, Saxon, in the spring.