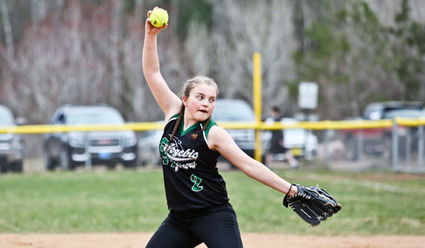 Katy Rand pitches for the Gogebic Miners - a new co-op softball team with players from Bessemer and Wakefield-Marenisco high schools - on Tuesday at Ironwood. The Miners lost this, their first game, 15-4.

IRONWOOD – Anticipation was in the air as a large-sized crowd gathered to watch the Gogebic Miners and Ironwood square off in a softball game on Tuesday.

When it was over, a good Ironwood team defeated Gogebic 15-4, but the Red Devils only led 5-3 after three innings and the Gogebic fans gave their team a nice round of applause as they left the field.

"The girls were excited to play...