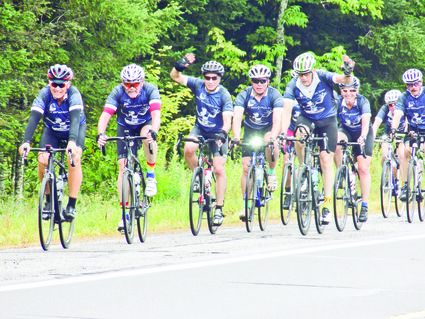 A GROUP of cyclists participates in the inaugural Upper Peninsula Iron Belle Trail Ride Thursday along U.S. 2, near Marenisco. They began in Ironwood just before 8 a.m. and plan to be in St. Ignace on Saturday. Organizer Bob Jacquart is third from the left.

IRONWOOD - Eleven cyclists took off from Ironwood Thursday morning on what they called the inaugural Upper Peninsula Iron Belle Trail Ride, with a goal of arriving in St. Ignace on Saturday.

The riders will cross the Upper Peninsula on the non-motorized Iron Belle Trail, which is designated to cross the entire state, uninterrupted from Ironwood to Belle Isle in Detroit.