Midgets' comeback runs out of time 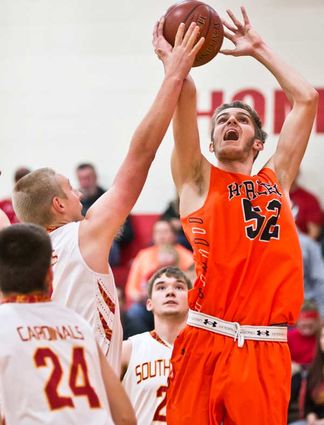 In the second half, Hurley showed it may just be a sleeper in the Indianhead Conference, fighting back to within a possession. They ultimately lost 50-48, but they came away with a lot of positives.

"I'm just pleased with how the kids bought into not going crazy in the second half," Hurley assistant coach Scott Erickson said. "Possession by possession, get good looks and good things will happen. I thought they did that and brought themselves right back into the ballgame."

The Cardinals dominated the first half and led by 19 points on the strength of five 3-pointers on some great looks.

"We missed so many inside shots in the first half and gave up so many offensive rebounds to them, it was frustrating," said Erickson, who was coaching for Mike Swartz who had a family matter to attend to. "I thought we were moving the ball where we needed to get it. We just couldn't finish the shots and then we got in foul trouble."

That included a new player, senior Arthur Johnson. He re-entered with four fouls and put the comeback into high gear, scoring five straight points himself, getting to the hole twice and creating a steal. Just like that, it was a two-possesion game with Hurley down 44-40 with about five minutes left.

A free throw narrowed the game to a single possession, but Johnson went up after a poor Hurley inbound pass and was called for his fifth foul with 4:23 left.

"Arthur had a lot of momentum going, but Arthur also has to remember how many fouls he's got," Erickson said. "Sometimes you can't play the way you'd like to when you're saddled with a little bit of foul trouble. He's going to be a nice addition this year no doubt."

He's one of the players Hurley is working into the lineup along with big man Gavin Ransanici, both of whom showed promised Monday. The other three starters were the leading scorers last year: Carson Thewis, Isaac DeCarlo and Justin Sukanen.

"We're still trying to figure out how to play with these guys and the sets that we want to run," Erickson said. "Overall it wasn't a bad game for us, certainly would have liked to come out of here with a win, but saw a lot of good things."

The Midgets still had a chance to win it without Johnson.

Hurley missed a 3 to tie with 2:41 left. The teams traded baskets and with a 47-44 lead, South Shore slowed it down. Sukanen almost got a steal and eventually Hurley had to foul.

South Shore helped out by missing both free throws - they were 4 for 15 in the second half and 4 for 19 in the game.

Hurley missed another 3 to tie, but Sukanen was fouled trying to put it back in. He made one of two and the Midgets were within 47-45 with 12.6 on the clock.

The way South Shore was shooting free throws, it needed something different on the inbounds pass. They threw it full-court to Dallas Williams, who was able to hit the shot despite being fouled on the attempt under the basket. He made the free throw and the three-point play to put the Cardinals ahead 50-45.

"Carson was right there, he made a great play on it and the kid got it up. That's the way it goes," Erickson said.

Hurley had to foul. Unfortunately for them, DeCarlo was the one who had to commit it and that was his fifth.

South Shore missed both free throws, but Hurley had just 2.6 seconds left on the clock. In the mad scramble to go full-court, Hurley did not get a shot off.

Thewis led Hurley with 16 points. In a perfect world, the rebound or relay would have gone to him because he had just made a big 3, but it didn't work out that way.

"I think we got a little lazy defensively at times, but ultimately just missing free throws and not hitting shots we probably should have been hitting," South Shore coach Matt Bailey said. "But I give credit to the Hurley guys, they played really hard in the second half and made plays, especially down the stretch. Thewis hit a couple big shots."

Doug Hipsher led South Shore with 17 points, Williams had 15 and Connor Sorenson had 10.