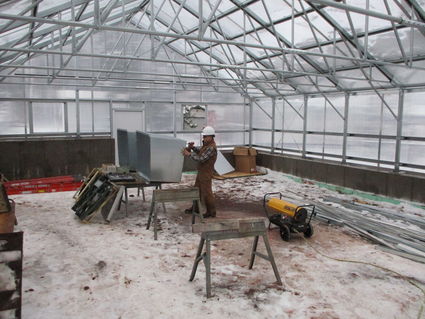 Ironwood - The Gogebic-Ontonagon Intermediate School District is bringing a bit of the great outdoors inside by building a new greenhouse near Luther L. Wright K-12 School.

The GOISD's Career Technical Education Department's new agriculture program will use the facility.

CTE Director Shawn Klobis said the Gogebic County program began the school year with 11 students. There were 14 to start the year in Ontonagon.

In Ironwood, the 32-by-40-foot structure is being built north of the school, just east of the football field. Klobis said its construction displaced the long jump pit.

Moyle Construction, of Houghton, is general contractor for the project. Klobis said the bids for the Ironwood greenhouse came in at $136,350. While the windowed walls and roof are up, he said the plan is to pour the concrete floor this spring.

The Ontonagon greenhouse opened this past fall at a cost of $123,000.