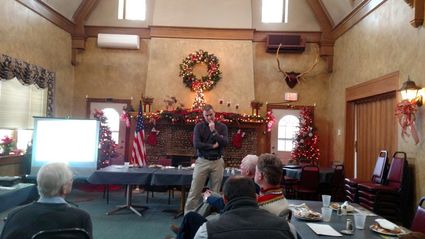 HIGHLAND COPPER'S Sylvain Collard talks to the Ironwood-Hurley Rotary Club Wednesday at the group's meeting at the Elk and Hound in Ironwood Township. Collard discussed the progress Highland has made in developing a copper mine in northern Gogebic County, where construction could start as early as the second half of 2018.

Editor's note: The Daily Globe is counting down the Gogebic Range's top five stories of 2017 each day this week. The editorial department staff sat down and came up with its annual list, naming Highland Copper's effort to resume copper mining in the western Upper Peninusla. as the fifth-place story of the year.

Those wanting to see the return of copper mining to the western Upper Peninsula were excited to hear the news of Highland Copper's efforts to develop mines in the region - including Gogebic and Ontonagon counties.

Based on the informatio...