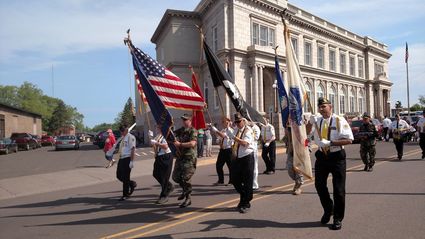 Ironwood - A day after celebrating the accomplishments of its graduates, Ironwood gathered Monday to honor and remember those who gave their lives serving their country.

While for some Memorial Day has become an extra day off work and excuse to grill or barbecue, Ironwood Mayor Annette Burchell reminded those attending the ceremony of the purpose of the holiday.

"Memorial Day isn't meant to be a national holiday of celebration. Memorial Day is a time for reflection, pause, remembrance and thanksgiving - to pay tribute to the brave soldiers who laid down their lives while in military service to our country," Burchell said. "Today we honor and remember the over 1.1 million U.S. soldiers in our nation's young history who died defending our lives, our freedoms, our peace. Their sacrifices will forever deserve our highest respect and our deepest gratitude."

The day began with a ceremony at the Ironwood Memorial Building before a parade to the city's Riverside Cemetery, with a brief stop to place wreathes at the city's monument near the post office.

At the cemetery, wreathes were placed to represent the wars the country has been involved in from the Civil War to the current conflicts in Afghanistan and Iraq.

After the wreaths were placed and flowers were tossed into the Montreal River for the Naval Spray; there was both a volley salute and battlefield salute to fallen comrades, after which "Taps" was played.

The day ended with the Luther L. Wright band performing the National Anthem.