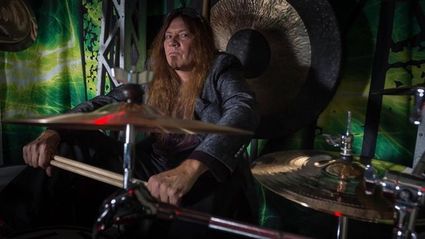 WAKEFIELD NATIVE Lonnie Hammer is getting ready to release his debut solo album, "Total Annihilation" later this summer. Hammer will have an early meet-and-greet today in Wakefield's Eddy Park to give locals the first chance to get their hands on the music.

IRONWOOD TOWNSHIP - Wakefield native Lonnie Hammer has been a professional musician for most of his life and has recorded on 17 albums. However, until now, he's never put out a solo album.

Gogebic Range fans will have the first chance to get Hammer's latest album, "Total Annihilation," today at a meet-and-greet at 7 p.m. at Eddy Park's pavilion during the Wakefield town picnic.

A preview event for the album from Hammer's new band, Hammer Down Hard; today's event comes three weeks before the album is released on radio and one month before it goe...