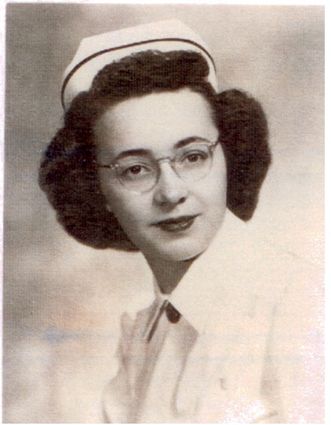 Mayme was born on May 18, 1928, in Wakefield, a daughter of John and Madeline (Bates) Ferratto. She attended Wakefield High School and graduated in 1946. Mayme continued her education and earned a nursing degree at St. Mary of Nazareth School of Nursing in Chicago in 1949.

On July 12, 1952, Mayme was united in marriage to Harold M. Jarvi in Wakefield. They were blessed with a daughter, Mary Kaye. Harold passed away in an untimely death on April 2, 1967.

On July 28, 1973, Mayme married Joseph C. Calabro at Immaculate Conception Catholic Church in Wakefield. They celebrated nearly 39 years of marriage until his death on Jan. 31, 2012.

Mayme worked as a registered nurse for more than 28 years at Divine Infant Hospital in Wakefield and retired in 1978. Following her retirement, she worked for four years during the winter months at Indianhead Mountain Pro Shop.

Mayme was a faithful member of Immaculate Conception Catholic Church and its women's guild. She was a dedicated volunteer for the American Red Cross.

Mayme relocated to Green Bay three years ago to be closer to her family. Her greatest pleasure came from spending time with her family and friends.

Besides her husbands, Mayme was predeceased by her parents; three sisters, Mary Menghini, Elsie Foster and Mary Shefka; and a brother, Domenic Bugni.

A Mass of Christian Burial will be celebrated Monday, Aug. 6, at 11 a.m., preceded by visitation at 10 a.m., at Immaculate Conception Catholic Church, 407 Ascherman St., Wakefield, with the Rev. Dominic Agyapong, celebrant, assisted by Deacon Larry Mastalish.

Luncheon will be served at the church hall immediately following the Mass.

Private Rite of Committal and interment will take place at Lakeside Cemetery, Wakefield.

Expressions of affection in a charitable contribution in Mayme's memory in lieu of flowers may be made to the charity of one's choice.

The family wishes to acknowledge and thank profoundly the wonderful staff at Woodside Manor and Unity Hospice for their kind and compassionate care.