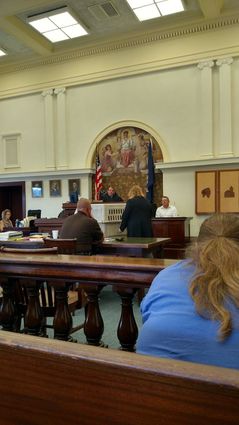 Chief Assistant Prosecutor Tracie Wittla shows a dog crate to CPS worker Brad Smith Tuesday in Gogebic County Circuit Court during the trial of Matthew LaPlant. LaPlant is facing child abuse charges, including accusations he put a child in the crate as punishment.

BESSEMER - Allegations of being locked in a dog cage, being physically beaten and made to taste soiled underwear were the focus of testimony as the prosecution began its case in Gogebic County Circuit Court Tuesday against a Bessemer man facing child abuse charges.