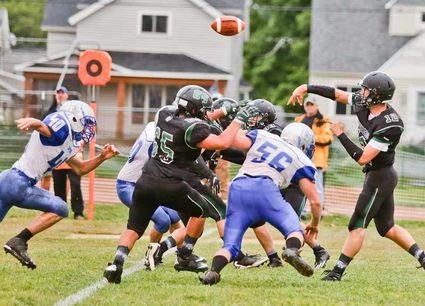 Gogebic's Parker Wilson steps up in the pocket and throws a pass down the middle during Friday night's game against Calumet at Massie Field in Bessemer.

BESSEMER - Coach John Croze likes to ground and pound the ball on offense and play physical defense and his Calumet Copper Kings did both very well in the season opener against the Gogebic Miners.

Calumet rolled over Gogebic 48-6 at Massie Field on Friday night.

"That's a heckuva team," Mazzon said. "They've got a good program and they are big and physical-you can tell that team has been in the weight room. They are going to give a lot teams a lot of problems. What it came down to is they have a lot of upperclassmen and we have a lot young kids. (seven sophomores on the varsity roster). We won't play many teams as good as them."

"We have 14 seniors with lots of experience and a real nice junior class," Croze said. "It was a veteran team versus a young, inexperienced team. In the last two years, we were young and we took our lumps.

"I thought we sent a big message today. We executed our offense very well today. We were trying to control the line of scrimmage on both sides of the ball and we did that."

The Copper Kings rushed for 357 yards on only 17 carries and senior Travis Ojala racked up 193 yards on six carries.

The game actually started out pretty well for the Miners. Calumet's quarterback Brent Loukus fumbled the center snap on their first series and Gogebic's Joey Rocco pounced on it at the Copper King 32-yard line.

But four plays later, Gogebic was forced to give up the ball on downs. Three plays after that, Travis Ojala went off tackle and took off on a 61-yard jaunt for a TD at the 4:40 mark. Ojala took a direct snap form his halfback position and ran in the 2 point conversion for an 8-0 lead.

"We started off good, but we didn't do many good things after that," Mazzon said.

The Miners went three and out on their next possession and were forced to punt. The ball was snapped over Parker Wilson's head and Calumet took over at the Gogebic seven yard line. The Copper Kings matriculated down to the one-yard and Sam Erkkila took a pitch out and swept the right side to pay-dirt with 2:17 remaining. The conversion run failed and the Copper Kings went up 14-0.

Gogebic next drive stalled out and Travis Ojala kicked an off-tackle play outside and turned it into a 44-yard run. On the next play, Daniel Moreno Bermudez ran a quick trap play up the middle for a 24-yard score. Travis Ojala's 2-point conversion run stretched the lead to 22-0.

The Miners couldn't get their offense in gear and were forced to punt again. Jacob Tanskanen fielded Wilson's long punt and returned it 41 yards to Gogebic's 24 yard line. On the play, Gogebic's Cody Schwartz was trying to make the tackle and suffered a knee injury on a block. He was in a lot of pain and had to be helped from the field.

Quarterback Brent Loukas looked to be running the option to the right but he pitched it to Matt Ojala on a reverse and a 14 yard touchdown run as Ojala out-ran Gogebic's defense and got around the corner. The extra point kick was wide, but Calumet led 28-0.

Gogebic increased its lead to 35-0 with 2:43 left in the half when Travis Ojala struck again and scampered 66 yards for a touchdown. Bermudez kick gave the Copper Kings a 35-0 advantage.

In the second half, Erkkala busted up the middle and went 60 yards for a TD at the 8:19 mark. Even though the x-point kicked sailed wide, Calumet increased its lead to 41-0 and running clock kicked in.

Gogebic had one last highlight. Wilson rolled out to his right and before he went out of bounds, he fired a long pass down the middle to John Jett on a 38 yard play.

Mazzon was already thinking about next week.

"We've got to pop it back up and work harder next week," Mazzon said. "There's teams out there that won't be as good as Calumet. We've just have to move forward and get better at everything."

Sethe Cole showed promise as a sophomore running back as he ran for 54 yards on 12 carries, while Wilson was 2-10 for 41 yards but was under pressure nearly the entire game.

The Miners (0-1) travel to Hancock for another West-PAC game on Friday.