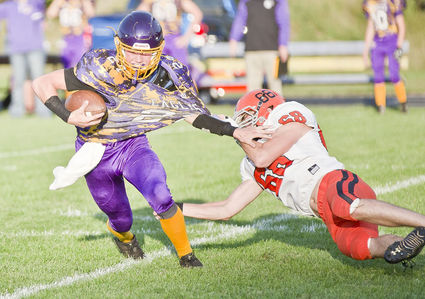 Hurley's Forrest Wiedbrauk (68) grabs Suring quarterback Josh Reed by the jersey in Friday night's game at Suring. Wiedbrauk and the defensive line got good pressure on him Friday night.

SURING, Wis. --- Andy Hamlin ran for five touchdowns as Hurley improved its record to .500 with its second consecutive win, 62-7, at Suring Friday night.

The Midgets' offense was operating at an elite level all evening.

Hamlin scored touchdowns on five of his nine carries and rushed for a team-best 174 yards. Dakota Haanen rushed eight times for 143 yards, and between them, they averaged 18.6 yards per carry. But Haanen was injured on the last drive the starters played and his status going forward is uncertain.

The Midgets (2-2) now go back home with a huge game coming up against familiar f...