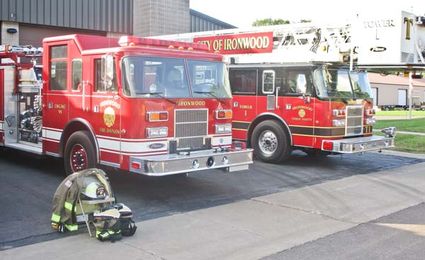 The Ironwood Public Safety Department displayed a firefighter's gear in front of its facility on McLeod Avenue Tuesday on the 17th anniversary of the Sept. 11 attacks.

The attack began at 8:45 a.m., when the first plane hit the north tower of the World Trade Center. Immediately news coverage was telling and showing American citizens the tragedy. People gathered around their television sets confused as to how it happened, speculating as to whether it was a freak accident or an actual attack.

Eighteen minutes later, when the second plane crashed into the south tower, it was evident the nation was under attack.

At 9:45 a.m., American Airlines Flight 77 crashed in Washington, D.C., at the Pentagon as 125 military personnel and civilians were killed, as were 64 people aboard the airliner.

United Flight 93, which had been hijacked 40 minutes after leaving Newark Liberty International Airport, went down at 10:10 a.m. after passengers fought four hijackers. The passengers are suspected to have attacked the cockpit with a fire extinguisher. The plane then flipped over and plummeted to the ground, killing all 44 passengers aboard.

A total of 2,996 people were killed in the terrorist attacks on Sept. 11, 2001. At the World Trade Center, 2,763 people lost their lives. This includes 343 firefighters and paramedics, 23 New York City police officers and 37 Port Authority police officers.

On Tuesday, families gathered at Ground Zero to take part in the annual commemoration ceremony where the names of those who lost their lives are read.