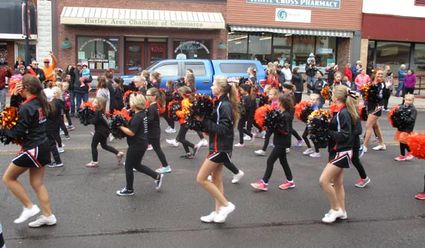 Hurley HIGH School cheerleaders march in Friday afternoon's homecoming parade on Silver Street with a group of elementary cheerleaders. They performed to a large crowd at halftime of Hurley's football game against visiting White Lake-Elcho that evening. The Midgets won 54-0.

The initial reaction seems to be mostly opposed to changing the name.

The school board voted to form a committee and "engage in a transparent process to evaluate the mascot," a statement released Thursday by district administrator Chris Patritto noted.

Although school board president Joe Simonich, of Kimball, said the district had been threatened in the past because of the name, there is no current lawsuit or formal action begin taken, Patritto said.