Ontonagon all woman school board swears in 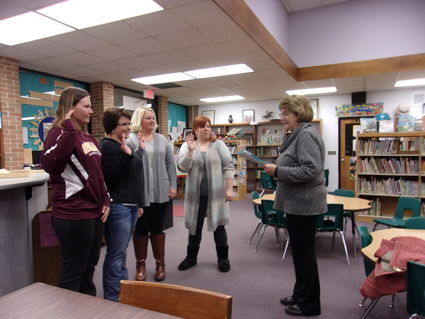 The Ontonagon Area Board of Education for the first time in its history has all women trustees. Nancy Mattson swears in new board membersfrom left: Rebecca Bramlett, Tammy Strasser, Rebecca Pantti and Julie Kolpack.

Ontonagon - An all women Ontonagon Area School Board of Education, the first of its kind in the history of the district, officiated at the reorganizational meeting of the board on Monday.

At the onset of the meeting the four women who were newly or re-elected in November were sworn in by board member Nancy Mattson. Tammy Strasser and Julie Kolpack were re-elected, and Rebecca Bramlett and Rebecca Pantti were newly elected. Other board members are Tanya Weisinger and Karen Jackson.

In the election of officers, Mattson was elected board president. She replaces longtime former President Dean Juntunen, who retired. Mattson is a graduate of Gogebic Community College and Northern Michigan University. She served as controller at Smurfit-Stone Container, and was the CFO at the PM Power Group in White Pine until her retirement. She is presently a member of the Board of Directors at the Citizen's State Bank. At approximately 12 years, she is now the longest serving member of the school board.

"I am proud to serve this district which has a great student body, dedicated hard working staff and wonderful support from the community," Mattson said.

Superintendent Jim Bobula presented certificates of appreciation to the board recognizing "all you have done and are about to do," as part of School Board Appreciation Month.